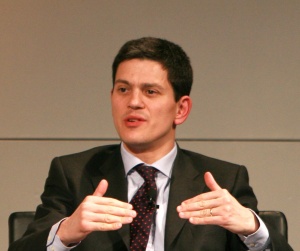 David Miliband is a former UK Labour minister and Labour MP for South Shields. In March 2013 he announced that he was stepping down from his seat to become the president and CEO of the International Rescue Committee at its New York headquarters.[1]

Miliband entered the Cabinet as minister of communities and local government in May 2005, a year later he was promoted to environment secretary at Defra where he replaced Margaret Beckett. Even before his promotion, Miliband was being talked of as a potential successor to Blair. His nickname is “brains”. [2] [3] [4]

David Miliband is the son of the late Ralph Miliband, an important left theoretician who wrote books on political theory and Marxism. Ralph was a scholar at LSE for many years. David's brother Ed Miliband is the leader of the opposition.

His appointment cleared way for nuclear

Miliband is said to be publicly “open-minded” on nuclear and has said “it has to remain an option” in fighting climate change. However, by replacing Margaret Beckett as environment secretary, who was seen as sceptical about nuclear power, Miliband’s appointment was “widely seen as clearing one obstacle to building more nuclear plants”, as the BBC put it.

His admission that "Obviously the benefit of nuclear power is that it emits zero carbons but obviously there are costs associated with nuclear power and there are also waste issues, which are very important,” was seen as hinting that he was in favour of nuclear.[5] [6] [7]

Just days after his appointment as Environment Secretary, The Sunday Times reported how Miliband was “embroiled in a sleaze row … over his links to a nuclear industry lobbyist. The lobbyist — Alan Donnelly — chairs the minister’s local constituency party”.

According to the paper, Sovereign Strategy, Donnelly’s lobbying firm, represented the US multinational Fluor, one of the world’s biggest nuclear companies, which at the time hoped to win a stake in the £70 billion British nuclear waste market. Donnelly also founded and helps run the Transatlantic Nuclear Energy Forum (Tanef), an organisation that aims to foster “strong relationships” between nuclear power companies and governments. [8]

In November 2007, the Saudi royals and high officials were in London on a state visit that included ceremonies with the Queen, meeting senior government officials, etc. The Saudis arrived with a several hundred-strong delegation requiring five jumbo jets to bring them from Saudi Arabia. Although he was Foreign Secretary at the time, Miliband did not meet the Saudi king and entourage, because he was on paternity leave. In his place Kim Howells delivered the accolades to the Saudi royals about British and Saudi "shared values".[9]

In 2008, Miliband was a guest of honour and host at the Annual UJIA Patrons Dinner. The event took place at the Foreign Office where Miliband welcomed 160 UJIA members. Miliband was introduced by UJIA President Trevor Chinn. At the dinner, Chinn 'recalled the time they spent together in Israel visiting Gap Year students' (during Miliband's first year as foreign secretary), he also described Miliband as a "clever and courageous Foreign Secretary.”

Miliband is reported to have said that it was “a privilege to be amongst friends”. In his speech he described the UJIA as “an organisation with an inclusive vision of Zionism” that the 'whole of Britain' can take inspiration from. He described the organiation as not being "scared to put itself in danger and teaches us that it is Israel which breathes new life into Jewish people".

In his closing statements, Miliband is reported to have offered a toast to the UJIA and said that “It is happiness and optimism that lives at the heart of Jewish people and the state of Israel and is the mission of UJIA, and I toast the continued success and growth of that optimism.”[10]

Miliband was a member of the Advisory Board to the UAE Ministry of Foreign Affairs/Chatham House 2011 Sir Bani Yas Forum. (£60,001-£65,000) He declared the following on the MPs Register of interests: