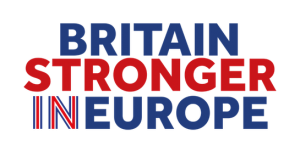 Britain Stronger in Europe was the official 'remain' campaign group promoting the benefits of continued membership of the European Union in the British referendum on 23 June 2016.

It was the only campaign group to apply to the Electoral Commission to act as flag bearer for the remain campaign and is registered as 'The In Campaign Ltd'.

Britain Stronger In failed to persuade British voters of the merits of continued membership, and the country voted resoundingly to leave on 23 June 2016 with 51.9% of the vote and a majority of 1,269, 501. [1]

'To vote to remain part of Europe is to vote for a stronger, better off, safer Britain that delivers opportunity for individuals and families, now and in the future. To vote to leave is to take a leap into the unknown, risking a weaker economy, the prospects of future generations and a loss of influence on the world stage.' [2]

It enjoys support from across the political spectrum, with backing from key figures in the Conservative Party and the Labour Party, as well as the former leader of the Green Party, and pro-EU groups such as European Movement, Open Europe and the Centre for European Reform.

When figures were published on 11 May 2016, it was revealed that between 1 February and 21 April, Britain Stronger in Europe had raised £6.9 million in donations, more than double Vote Leave's total of £2.8 million, with the remain campaign significantly boosted by Lord David Sainsbury's donations adding up to £2.3 million.

The Electoral Commission has also removed 11 groups that fell under the Grassroots Out movement from its register, restricting them from spending more than £10,000 on campaigning. Britain Stronger in Europe said the ruling was 'a damning verdict on Leave campaigns' attempts to circumvent the strict spending rules'. Conservative Party MP and co-founder of Grassroots Out Peter Bone hit back, saying the remarks were 'absurd, wrong and very disturbing'. [3]

Harman: EU referendum too important to be left to men

Former deputy Labour Party leader Harriet Harman has written to Ofcom regarding the domination by men in the EU referendum debate on TV and radio. Harman delivered a speech on Tuesday, citing Labour analysis showing that men have made up 83 per cent of guests on the BBC Radio 4 Today programme since January.

A Loughborough University report found that only one in ten commentators in the national press were female, and on television the number was one in six. Harman argues that:

'Half the population of this country are women and our membership of the EU is important to women’s lives. Yet men are, as usual, pushing women out. Women are being excluded and the debate narrowed. The broadcasters have a legal duty to keep a balance between those who want remain and those who want to leave. They should have a balance between men and women. This referendum is too important to be left to men.'

Dominic Wing, professor of political communication at Loughborough and one of the report's five authors said that Conservative politicians and divisions in the party have 'stolen the show' and that:

Longstanding campaigners such as Nigel Farage and Alan Johnson have been comparatively marginalised. Unlike Cameron and his putative successors, Jeremy Corbyn’s profile has been similarly modest. But these male politicians have at least received some attention whereas women representatives have been seldom seen, heard or reported in this stage of the campaign. Nicola Sturgeon’s absence from the news reporting considered here is quite striking [and] reflects the marginalisation by the media of the constitutional implications of a vote for Brexit.' [4]

Scottish First Minister and leader of the Scottish National Party Nicola Sturgeon has hit out at the tactics of the remain campaign and warnings of economic chaos as 'insulting people's intelligence'. She vowed instead to make 'the positive and progressive' case for remaining in the EU.

Her comments came after a press conference held by Cameron and Osborne in May 2016 about a Treasury report forecasting economic catastrophe and a 'DIY recession' for the UK, arguing that up to 820,000 jobs could be lost, the value of the pound would be hit and wages would decline in the result of a Brexit vote. Osborne said: 'With exactly one month to go to the referendum, the British people must ask themselves this question: can we knowingly vote for a recession? Does Britain really want this DIY recession? Because that’s what the evidence shows we’ll get if we vote to leave the EU.'

A sceptical Sturgeon said: 'I think the Treasury, like they did in the Scottish independence referendum, are likely to be over-stating their case. That kind of fear-based campaigning that starts to insult people's intelligence can have a negative effect.'

Vote Leave also condemned the viability of the Treasury report: 'Even the most ardent campaigners for Remain recognise that the Treasury forecasts are descending into farce. George Osborne set up the Office for Budget Responsibility to keep forecasts neutral from politicians. Now he's got the Treasury pumping out pro-EU propaganda.' [5]

President of the World Bank Dr Jim Yong Kim has declared that a vote for Britain to leave the EU on 23 June could have a 'negative impact' on and is 'one of the biggest risks' to developing countries the world over, given that Britain's economic standing has a direct impact on stability globally. Kim also claims that the gap between global commodity imports and commodity exports could get much worse if Britain does decide to go it alone.

He told BBC Radio 4's World at One: 'The stability of the British economy is really important for the stability of the global economy and also uncertainty in global capital markets have very negative effects even on the poorest countries.'

Chris Grayling, pro-leave campaigner and Conservative Party's Leader of the House of Commons told the same show however: 'The chief economist of the World Bank Kaushik Basu, speaking in a personal capacity, said Britain could be better off outside the EU if it forged new trade ties and cemented old ones. So this is not a black-and-white picture. There are people who take one view; there are people who take another view.'

The president's warnings coincide with a forecast by the Treasury and Chancellor George Osborne that Brexit could throw the UK into recession and up to 820,000 jobs could be lost. [6]

Global banks bankroll battle to keep Britain in the EU

David Cameron's campaign to keep Britain in the EU (and by extension to save his political skin) has reportedly been funded by the global banking sector to the tune of £1.5 million. The list of funders includes banking heavyweights such as Goldman Sachs, JP Morgan, Morgan Stanley and Citibank, and Britain Stronger in Europe (the lead Remain campaign) has also received a £20,000 loan from Lloyd's Bank at a rate of just 1%.

The Leave camp, headed by Vote Leave, has dubbed this a 'David vs Goliath' battle, with the global financial elite clearly attempting to close ranks as the referendum approaches.

Former SDP leader Lord David Owen articulated this point in depth: 'The EU works in the interests of the elite - the one percent - so it is entirely unsurprising to find that the campaign to keep us in the Union is financed by big banks like Goldman Sachs and JP Morgan. With their unlimited cash, they are lobbying the British people to act in a way that benefits their profit margin. Remember, these banks are the very people who crashed the economy in 2008 - mis-selling toxic mortgages and cooking the books to allow Greece to join the single currency...These figures show again that we are in a David vs Goliath fight, but it is one we are determined to win.' [7]