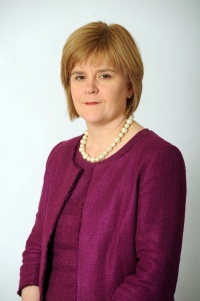 Nicola Sturgeon is the fifth and current first minister of Scotland and leader of the Scottish National Party (SNP). She took on the role in 2014 following the resignation of Alex Salmond after he failed to secure Scottish independence in the referendum that was held in November that year. Sturgeon also represents Glasgow Southside as its MSP.

Sturgeon studied law at the University of Glasgow and went on to work as a solicitor. In 1992, the year she graduated, she had already been an SNP member for six years, and that same year became Scotland's youngest parliamentary candidate.[1]

She joined the SNP in 1986, having already become a member of the Campaign for Nuclear Disarmament, and quickly became their youth affairs vice convener and publicity vice convener. She first stood for election in the 1992 general election as the SNP candidate in the Glasgow Shettleston constituency, but failed to win the seat. [2]