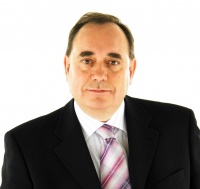 Alex Salmond is the Scottish National Party (SNP) MP for Gordon, having won the seat in the May 2015 general election. [1]

The previous SNP leader and first minister for Scotland, stood for the constituency of Gordon which had been held by the Liberal Democrats' Malcolm Bruce since 1983. Salmond was able to defeat the new Lib Dem candidate Christine Jardine with a majority vote of 8,687 having gained a share of 48 percent of the vote. [2]

Following his victory, Salmond declared that 'there is a lion roaring tonight, a Scottish lion. I don’t think any government, of any particular complexion, can ignore it.' [1] Salmond is just one of fifty six SNP candidates who was victorious in the 2015 general election in May, the SNP won a 5 per cent share of the national vote. [3]

In January of 2015 the Advisory Committee on Business Appointments approved Salmonds request to accept contracts for writing columns and contributing regular articles to various national and local newspapers. [4]