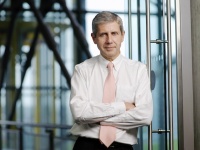 Stuart Rose (Lord Rose of Monewden) is the chairman of the online UK supermarket Ocado and is best known as the former chairman and chief executive who turned around food and retail group Marks & Spencer.

Rose began his career as a management trainee at Marks & Spencer, he spent 17 years there before moving to the Burton Group. Periods as chief executive of Argos (2008) and Booker (1998-2000) followed as well as a role as chief executive of Arcadia Group (2000-2002) - the owners of Topshop and BHS. Rose turned the business around and presided over its sale for a reported £855 million to Philip Green. Rose then moved back to Marks & Spencer.

He is currently chairman of internet supermarket Ocado as well as directorships with Fat Face Limited and Oasis Healthcare and a senior adviser to HSBC European.[2][1]

Support for the Conservatives

On 1 April 2015 Rose was one of 103 business leaders who wrote to the Telegraph praising the British Conservative Party's economic policies and claiming a Labour government would 'threaten jobs and deter investment' in the UK.[3]