Difference between revisions of "Fiona Fox" 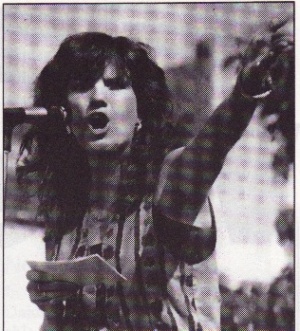 Fiona Fox listed as 'Fiona Foster' in a picture from the journal she edited at the time: Irish Freedom the bulletin of the Irish Freedom Movement, Issue 18 Summer 1992.

Fiona Fox is the director of the Science Media Centre (SMC) and is associated with the libertarian anti-environmental LM network and its precursor, the Revolutionary Communist Party.

As a student, she joined and was subsequently a leading member of the Revolutionary Communist Party and of its front group the Irish Freedom Movement. She was for a period (circa 1992) the editor of its bulletin titled Irish Freedom. Fiona Fox wrote, using her party name, Fiona Foster, for Living Marxism, appeared in Spiked,[1] chaired sessions at the Battle of Ideas, [2] has adjudicated for Debating Matters, [3] is an adviser to the Progress Educational Trust[4] and wrote, again as Fiona Foster, for Novo Argumente. Fiona is a younger sister of leading LM associate Claire Fox and is married to LM associate Kevin Rooney, with whom she has had a son, Declan. [5]

Despite having no previous background in science or science communication, Fox has been afforded, since her appointment to the Science Media Centre in December 2001, the status of expert. She has, for example, been included in a working party on peer review set up by Sense About Science, and in a steering group on improving communication over science policy and risk set up by the Office of Science and Technology. In 2003 Fox delivered a lecture at Green College, Oxford, on the challenge of adapting science to the mass media.

Fox was born in 1964, attended St. Richard Gwyn Catholic High School, Flint in North Wales and studied journalism at the Polytechnic of Central London. She started her career as an Assistant PR officer for Thames Polytechnic, followed by six years at the Equal Opportunities Commission, reaching the position of senior press officer. She then spent two years running the media operation at the National Council for One Parent Families, followed by Head of Media at CAFOD, the Catholic aid agency.

Within months of Fox becoming its founding director in 2001, the SMC was embroiled in controversy over its activities. It was accused of operating as "a sort of Mandelsonian rapid rebuttal unit" [6] and of employing "some of the clumsiest spin techniques of New Labour"[7]. There have also been controversies about both the SMC's funding and Fox's background.

According to the Science Media Centre, Fox previously ran "the media operation at the National Council for One Parent Families" and was "Head of Media at CAFOD, the Catholic aid agency". In addition, the SMC profile says, Fox "has written extensively for newspapers and publications, authored several policy papers and contributed to books on humanitarian aid".[8] What they do not say is that throughout much of that time Fox led a double life. It's one which seriously undermines the SMC's claims to be open, rational, balanced and independent, not to mention its being in the business of ensuring the 'that the public gets access to all sides of the debate about controversial issues.' It's a double life that connects the SMC's director to the inner circles of a political network that compares environmentalists to Nazis and eulogises GM crops and cloning. More disturbingly, it is a network whose members have a long history of infiltrating media organisations and science-related lobby groups in order to promote their own agenda. It is also a network that has targeted certain media organisations and sought to discredit them or their journalists.

Fiona Fox's presence in the SMC needs to be seen in the context of other LM contributors holding senior positions, in a series of organisations which lobby on issues related to biotechnology, eg Sense About Science (managing director: Tracey Brown; director: Ellen Raphael), Genetic Interest Group (former policy director: John Gillott), Progress Educational Trust (former director: Juliet Tizzard, Communications Officer Sandy Starr), and the Scientific Alliance (advisor: Bill Durodie). The network's own entities, particularly the Institute of Ideas, relies heavily on funding from Pfizer, the Wellcome Trust and the Research Councils, funding provided on the basis that these entities will promote discussion of controversial emerging technologies.

This background is a cause for concern in relation to Fox's role as director of the SMC. Fox's Green College Lecture was titled, 'The truth, the whole truth, and nothing but the truth: so where does that leave journalism?' But neither Fox nor the Science Media Centre have been willing to disclose any of the truth about her long years of involvement with a network of extremists who engage in infiltration of media organisations and science-related lobby groups in order to promote their own agenda. It is also a network which eulogises GM crops and cloning and is extremely hostile towards their critics.

Fox's own journalism might also suggest that she is none too fussy about either truth or openness when it comes to pushing her agenda. It is perhaps revealing that someone whose own journalism has been called 'shoddy' and 'an affront to the truth', and has proved enormously controversial, has been selected as the director of an organisation which claims the role of making sure that controversial scientific issues like GM crops are reported accurately in the media.

In October 2010 Fiona Fox was in the news as a result of the disgraced former Labour politician Jim Devine being ordered to pay his former office manager 35,000 pounds in damages after she won an employment tribunal claim against him. Devine was already facing a criminal trial over allegations he fiddled his expenses as an MP.[9]

A key part of Devine's former office manager's case centered around a hoax call. The telephone call was made to the office manager by a friend of Devine posing as a journalist looking into MPs' expenses. This friend, in reality, was Fiona Fox.

Eventually the office manager realised the call had been a hoax. But this was only after she came across an e-mail to Devine marked urgent from Fiona Fox, Director of the Science Media Centre. The e-mail was mostly about the Human Fertility and Embryology Bill but at the end was a PS referring to the hoax call Fox had made to Devine's office manager.[10]

Fox and Devine seem to have struck up their close friendship while working together to win public support for animal-human hybrid embryos during the passage of the Embryology Bill. The fact that Devine was a Catholic was particularly useful, and he even brokered a special meeting between the head of the Catholic Church in Scotland and scientific supporters of hybrid embryos.[11]

The Science Media Centre was involved in co-ordinating the media work in support of the Embryology Bill, and Fox and her collaborators were particularly anxious not to see the Bill bogged down by public opposition, as happened with GM.[12]

Fox's involvement in the Devine hoax has not gone unnoticed in science communication circles. Ian Sample, the science correspondent of The Guardian, has written:

Though appalling from the off, it was not the top line [of the employment tribunal story] that shocked many of my colleagues most. What came as a surprise was the revelation far down the story that the fake call in question was made by Fiona Fox, head of the Science Media Centre in London, a prominent venue for press conferences on all matters scientific and medical. Otherwise articulate people who read the story struggled to say more than three letters: WTF?[13]