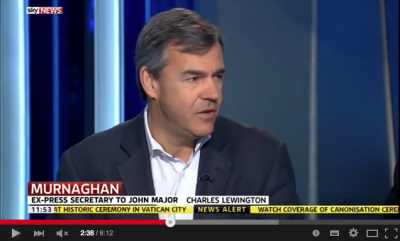 Charles Lewington is founder and MD of Hanover a leading PR consultancy. Formerly Press Secretary to John Major in the 1990s and Executive Editor of the Sunday Express Lewington founded the company in 1998.[1] In September 2007 Hanover were recruited by Gerry and Kate McCann after former treasury special advisor Justine McGuinness became overwhelmed by press interest in the McCann's case. The McCanns had previously used Bell Pottinger's consultant Alex Woolfall and Sheree Dodd, a former spokeswoman for the Government to assist them in handling the media. On Hanover's involvement with the McCanns Lewington said "The McCanns have been treated extremely badly by the press, it's only right to help them out." [2]. However, two months later Hanover ended their work with the family which they said "‘reflects a decrease in international press interest’ following the six-month anniversary of Madeleine McCann’s disappearance" [3]

Alistair Campbell was a thug but it was his job. I think the problem for New Labour was that there was a culture of spin throughout the Party, which meant they were never good at managing expectations. For example, they gave the impression that they could solve the problems of the National Health Service overnight but life doesn’t work like that.[4]

Lobbyists and MPs at the 2015 FT summer party