Thomas Cushman is Professor of Sociology at Wellesley College, Massachusetts, the Founding Editor of Human Rights Review, the Founding Editor, Former Editor-in-chief and current Editor-at-Large of The Journal of Human Rights and the Founder and Editor-in-Chief of The Jackson Review: A Journal of Democratic Geopolitics, soon to be published by Routledge under the auspices of the British Neocon think tank the Henry Jackson Society.[1] 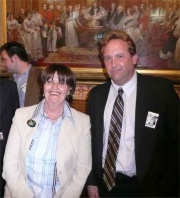 Cushman was a signatory of the Euston Manifesto and according to Jeffrey Herf, one of the authors of the American version:

In August, a group of liberals and centrists in the US decided to write and circulate "American Liberalism and the Euston Manifesto" in an effort to continue the effort begun in London. I wrote a draft which was debated and discussed by my co-authors Russell Berman, Thomas Cushman, Richard Just, Robert Lieber, Andrei Markovits and Fred Siegel. On September 12, we posted our statement on the Euston Manifesto Web site. The full statement and a list of more than 200 prominent signers are also available at the Web site of "New American Liberalism" at http://www.newamericanliberalism.org.[2]

According to the New York Sun, Cushman attended a gathering at the Progressive Policy Institute in December 2006:

In December, Mr. Marshall, who calls Schlesinger "an inspiration," hosted a quiet gathering of like-minded journalists and intellectuals at the Washington, D.C., offices of the institute. Mr. Marshall brought together Wellesley College professor Thomas Cushman, William Galston of the Brookings Institution, writer Peter Beinart, Leon Wieseltier of the New Republic, author Fred Siegel, Michael Allen of the National Endowment for Democracy along with Gary Kent, a Labor politician from Britain, among others, to find a way to concentrate liberals against terror.

Today's Web-oriented culture has made it difficult for these ideological warriors to gain traction. The force of anti-war blogs, such as the DailyKos, which targets liberals like Christopher Hitchens, who take the fight against jihadis seriously, is pervasive. Mr. Marshall has hope that the excesses of a presidential primary campaign will give way to the reasoned decisions of a general election. "In the general election, the discussion will have to turn to the Jihadist threat because it's not going away," Mr. Marshall says. "Elected officials have to represent real voters not the wrathful minions of cyberspace."[3] 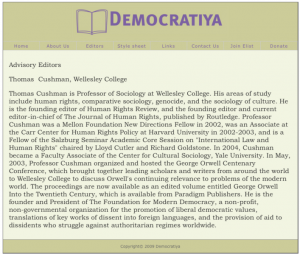 Cushman has cited Sidney Hook in support of the argument that terrorism is a threat to democracy .[8] According to Carl Gershman, Cushman was present at Sidney Hook and American Democracy: Current Crises; Future Challenges, a conference sponsored by the Social Democrats USA and the League for Industrial Democracy in Washington D.C on 1 October 2005.[9]

One would imagine that the almost atavistic tribalism of Europeans, crystallised in an ideology of 'Europeanism', ought to have dissipated with the advent of modernity and the recognition that, despite their differences, Western liberal democracies were united by a common culture. Nothing could be further from the truth. Long after the fascists were defeated, anti-Americanism remains alive and well - a deep vein of sentiment and an extremely powerful independent force shaping social outcomes.[10]

In April 2008, FrontPage Magazine published the record of a symposium on then-presidential candidate Barack Obama conducted by Jamie Glazov. Cushman took part along with with Jeffrey Herf and Fred Siegel.[11]

Cushman suggested that Muslims might consider Barack Obama an apostate:

According to the law of the Koran, if your father is a Muslim, you are considered to be a Muslim, regardless of whether or not you consider yourself a Muslim. In fact, if you do not assent to this ascribed religious identity, then in a literalist interpretation you are considered an apostate, the penalty for which is death. So by inference, we can surmise that a good proportion of the Muslim world considers Obama to be a Muslim and for many an apostate as well...

...I myself do not have any indication of the actual empirical sociological data about what Muslims think about Obama's religious status, but it is very likely that if many people in the world who live by the literal word of the Koran, then they will have their own meanings as to "who" (or should I say "what") Barack Obama is that have very little to do with what he says he is, or what we in the US think he is.[12]

behind this front stage performance of a new kind of African-American leader, it is clear that Obama remains closely tied to the most retrograde and reactionary elements of the African-American community. Backstage, the “unknown Obama” may be closer to people like Al Sharpton and Jesse Jackson than we were at first led to believe.[13]

He called for rank-and-file moderates "to take a deeper look at who the Senator really is":

What remains to be seen are the other unknown, or hidden affiliations and sentiments of the Senator, which may indicate that behind his effective and charming performances there lies a man who is deeply connected to some of the most radical and reactionary elements in American politics. And this is not purely in relation to those elements in the African-American community. It has recently come to light that Obama enjoys a close relationship to Bill Ayers a former member of the Weather Underground, whose professed aim (for which he is not apologetic) was to overthrow the American government through armed force.[14]

Cushman's suggestion that Obama could be viewed as a Muslim apostate followed similar claims on the FrontPage Magazine website by Robert Spencer[15] and Daniel Pipes[16] A month after the FrontPage symposium a similar theory was put forward by Edward Luttwak in the New York Times.[17]

On 19 May 2008, Cushman spoke at a Henry Jackson Society (HJS) event in the House of Lords sponsored by Baroness Cox, which looked at John McCain's proposal for a 'league of democracies'.[18]

This concept has been heavily criticised by journalist Robert Parry:

Despite these tactical differences, McCain has shown no sign of rethinking his vision of an alliance of “willing” nations going around the world challenging and replacing disfavored governments. Indeed, he has made this neocon concept a centerpiece of his presidential campaign. The presumptive Republican presidential nominee has proposed a “League of Democracies,” which would apply economic and military pressure on “rogue states” when the United Nations Security Council refuses to do so. Though McCain has dressed up his League of Democracies in pretty language about respecting international law and spreading freedom, its essence is to make permanent Bush’s “coalition of the willing” concept used in Iraq. McCain insists his League won’t supplant the Security Council, but it would do just that, fulfilling a long-held neocon dream of voiding the international system that U.S. leaders fashioned after World War II to enforce the Nuremberg principle that aggressive war was the “supreme” international crime. McCain’s League would create for the U.S. President a standing organization for engaging in aggressive war against “rogue regimes” whether they are an immediate, potential -- or imaginary -- threat.[19]

In an email to Neocon Europe, Cushman wrote of his talk at the HJS event:

I went out of my way to distance myself from the idea that the League of Democracy would advocate force when the UN did not, I argued instead for a League that would advance principles that are regular derogated at the UN and cautioned against the idea that the League would lead military forces, though I do believe that the destruction of totalitarian regimes necessitates the use of military force.[20]

According to the Henry Jackson Society's summary of the event, Cushman said that "there already was an informal League of Democracies at work during the debates over Iraq."

Almost all the democratic countries of the world supported the United States – nations like the UK, Japan, Australia, the countries of Eastern Europe. Only a small group of democracies were opposed, such as France and Germany. I think that formalising a collection of democratic nations would isolate dissenters, and put their objections in context. If they disagreed with the majority view of the League of Democracies, they’d have to appeal to the broader support of the UN. I’m not convinced a President Chirac could do that convincingly.[21]

According to the HJS account Cushman went on to state: "The initial phases of a League of Democracies should be slow."

Some have got ahead of themselves by arguing that a League of Democracies should be an interventionist body. This is far too assertive talk, especially when you consider that the organisation has not even been created yet. Such rhetoric is problematic as it dissuades people to support the idea in a more limited way. A forward military strategy may well be needed, but it is far too early to suggest that it may be just over the horizon. It might instead kill off any chance to deal with a possible Rwanda, Bosnia, or Burma in the future.[22]

A Matter of Principle: Humanitarian Arguments for War in Iraq

In 2005 Cushman edited A Matter of Principle: Humanitarian Arguments for War in Iraq[23], which featured several writers who were later associated with the Euston Manifesto and Democratiya.

"Cushman's labours should be appreciated by all those who have felt the need to do more than disassociate themselves from the Chomsky-Pilger worldview. This stimulating and diverse series of arguments make A Matter of Principle an important collection for anyone with an interest in the debate over the Iraq war, regardless of their views on the merits of the decision to invade."[24]