John Nicol Fortune Lloyd (born 15 April 1946) is a British journalist who for most of his career has been associated with the Financial Times, but who has also written for and at one time edited the New Statesman. He identifies himself as a liberal but is a prominent pro-war activist. He left the New Statesman in 2003 after being dubbed the magazine’s “house reactionary” by one of his colleagues.[1]

John Lloyd was born to Joan Adam Fortune and Christopher Lloyd on 15 April 1946 in Anstruther, a fishing village on the east coast of Fife.[2]. He grew up in Anstruther and attended the local comprehensive The Waid Academy after which he studied at Edinburgh University.[3]

In 1972 Lloyd was appointed editor of Time Out, a post he held for a year before working as a reporter for the London Programme and then a producer for Weekend World, 1976–77, [4]where he worked with the right-wing Labour MP Brian Walden who was close to a number of atlanticist and anti-communist networks. In 1977 he joined the Financial Times where he was first the paper’s industrial reporter and was later appointed its labour editor.[5]Lloyd left the Financial Times to edit the New Statesman from 1986–87 before rejoining the FT as its Eastern European Editor (1987–90) and later its Moscow Correspondent (1991–95).

He became a freelance journalist in 1996 and was a columnist for The Times from 1997 to 1998 and a contributor to the New Statesman until 2003 delivering what his editor called, “contributions from the cutting edge of Blairite thought”[6]

Lloyd’s departure from the New Statesman in 2003 was apparently in protest over the magazine’s anti-war stance, but more specifically he had taken issue with a colleague referring to him as the magazine’s “house reactionary” (he had by this time become closely associated with the neo-conservatives and the pro-war left). According to Peter Wilby, who was then editor of the New Statesman, Lloyd’s “principled stand occurred after he had secured the editorship of the new Financial Times magazine”,[7]which Lloyd edited from 2003-2005. Commenting on Lloyd’s departure The Independent wrote that “The presence of this Blairite apologist at the Statesman has been a puzzle for quite some time.”[8]

Around the same time that Lloyd left the Financial Times he also became involved with a number of think-tanks and academic institutions. He was appointed an Associate Fellow, at the Kennedy School at Harvard University in 1995 and was a Senior Associate Member of St Anthony’s College Oxford, 1996–99. Together with British American Project’s Nick Butler and Baroness Symons he became a director of the East-West Institute in New York in 1997. Funded by its impressive array of elite directors, the East-West Institute's honorary chair is George H.W. Bush. Lloyd also joined the New Labour associated think-tanks Demos and the Foreign Policy Centre and authored books published by both organisations.

Views - from Stalinism to Neoconservatism

Lloyd is a former communist who became a critic of the left’s anti-imperialism, and a proponent of military aggression by the United States and its allies.

The following are two accounts given by Lloyd, in 2002 and 2007 respectively, of his early association with the Stalinist left:

I was…a largely inactive member of the Communist Party of Great Britain between 1971 and 1973, and then a much more active participant in the tiny British and Irish Communist Organisation until 1977. I denounced my comrades, in a 20-page speech, for their Stalinism; I had just read, sweating with horror, all of Aleksandr Solzhenitsyn's Gulag Archipelago.[9]

I had had a brief membership of the Communist Party and a longer affair with a tiny group called the British and Irish Communist Organisation in my twenties: but by my late thirties I was a social democrat - in these febrile times for Labour, a member on the party's right wing. I had come to that through a renunciation of communism, and a sense of shame that I had attempted to embrace it: I had broken with the BICO with a speech to its annual meeting in Dublin, in which I argued that its attachment to communism was a dead end, and that its rich swath of publications and positions (one of which argued, most famously, that Ireland was two nations) were unremittingly hostile to much of the far left of the time, and were best understood as a democratic trend within the left. Losing the argument, I gave my allegiance and time to the Labour Party.[10]

Lloyd's account of the period have been disputed by others:

John Lloyd ('Show trial: the left in the dock', 2 September) claims to have written a long rejection of Stalinism on his departure from the British and Irish Communist Organisation in 1977. I do not remember this. Colleagues don't remember it. And the secretary, who, as John knows, was fastidious about such things, has no record of it.

His activities in the B&ICO involved his membership of the North London Workers' Control Group (marginally) in 1974, and he was one of our two representatives on the council of the Institute for Workers' Control. Mostly I remember him as part of the group around the magazine Problems of Communism. Although he claims to have left us in 1977, the summer 1980 issue contains an article he co-wrote with Nina Fishman.[11]

John Lloyd's protestations of a youth of historical ignorance ('Show trial: the left in the dock', 2 September) ring hollow to one who knew him in the 1970s as a leading member of the British and Irish Communist Organisation. This group was not only sophisticated in its historical investigations, but also had a reputation as the most unashamedly pro-Stalin group on the left. To suggest now that they were naive innocents, unaware of the millions of peasant deaths caused by the Russian workers' movement in the 1930s, is implausible.[12]

Lloyd describes his conversion from leftist to what might be termed democratic imperialism as follows:

When I ceased to be a communist and therefore ditched an essentially undemocratic philosophy, I adopted democracy as a new faith with the real fervour of the convert. We centre-left ex-communists believe passionately in democracy because we've reasoned ourselves towards it, so we are perhaps more prepared to support wars that establish or defend it.[13]

In February 2003, the Independent columnist Johann Hari (who has since apologised for his pro-war stance [14]) identified Lloyd as one of a group of centre-left figures 'lobbying hard' for the US/UK invasion of Iraq:

A year ago, the proposals for a second Gulf War seemed very much the brainchild of the American right. The intellectual arguments backing the conflict emerged almost entirely from hard-right US think-tanks and senators. But then, a funny thing happened: a significant portion of the dissident left began to come out, in dribs and drabs, for overthrowing Saddam by force. There is now a considerable school of British centre-left thinkers and commentators who are lobbying hard for war, so that the Iraqi people can be freed: Christopher Hitchens, Nick Cohen, John Lloyd, Julie Burchill, Roger Alton and David Aaronovitch.[15]

In a May 2003 New Statesman article, John Kampfner characterised Lloyd as part of "a first generation of British neoconservatives", of which he said: "The British neo-cons probably do not acknowledge their own existence. Many of them share a communist heritage that turned itself into Labour, new Labour and now Blair-second-term Labour."[16]

Lloyd rejected this characterisation in a Prospect article in July 2003.

Neither Aaronovitch nor I believe most of what Kampfner said we did, although both of us believed the US and Britain were right to invade Iraq. Neither of us were called. I checked with Gove, Phillips, Finkelstein and Pollard, and they were not called either. I had known Kampfner when we were both correspondents in Moscow: on one occasion, when he had intervened to try to ensure the safety of a friend of his when we were both in the besieged city of Sukhumi, I admired his courage.

I wrote him a bitter e-mail listing his distortions-though losing heart before the end, because of the uselessness of the exercise. (Aaronovitch also wrote a more detailed list, which he showed me.) Kampfner's e-mailed reply addressed none of my points and merely asserted that he had been fair. [17]

As the above quote suggests Lloyd does not see himself as right-wing but rather as a strong left winger, and has identified his own position with Karl Marx’s support for the British Empire’s subjugation of India. As Lloyd explains: “It’s that side of Marx that argues that imperialism was good for India... the side of Marx that disliked soft liberals and said that if you’re going to make the world better, you have to go through a number of necessary evils.”[18]Nevertheless Lloyd has openly acknowledged that his views are similar to those professed by neo-conservatives, almost universally considered to be on the political right:

It is a fairly radical policy and it comes close to some aspects of what has become known as Neo Conservative politics in the United States — the proposal of a new kind of interventionism which has been called liberal interventionism, or in some places neo-imperialism.[19]

Along with other nominal leftwing pro-War figures, Lloyd was a signatory of the Euston Manifesto. He has remained an unapologetic supporter of the invasion of Iraq and like other pro-war commentators such as Nick Cohen has come to define himself by his opposition to the anti-war movement. The Independent commented on his departure from the New Statesman that “Lloyd's articles…nowadays seem to consist of self- flagellating diatribes about why the left has got it wrong.”[20]

Lloyd modified this position in a 2005 New Statesman review of books on neoconservatism by Oliver Kamm and Douglas Murray:

Now I have to partially - only partially - retract the indignation (I can't speak for Aaronovitch, who does indignation better than I and who was, when I last spoke to him about it, still indignant). Kampfner, who apologised for the distress that his piece caused me, was partly - only partly - right. What I was supporting was not just, as I wrote in the July 2003 issue of Prospect, the invasion of Iraq: it was a foreign policy that the neoconservatives have articulated and made their own. Why I only partly retract the indignation, and why Kampfner is only partly right, is because neoconservatism, as Douglas Murray makes clear, covers much more than foreign policy, even if foreign policy has been its most dramatic stage. [21]

Another characteristic of Lloyd’s writings has been his hostility to popular movements. In The miners' strike, which he co-authored, he criticised the miners for being undemocratic. This was an accusation he later made of the anti-corporate movement in his 2001 book The protest ethic: how the anti-globalisation movement challenges social democracy, which was published by Demos. 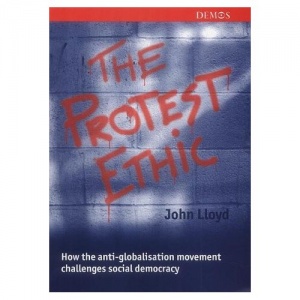