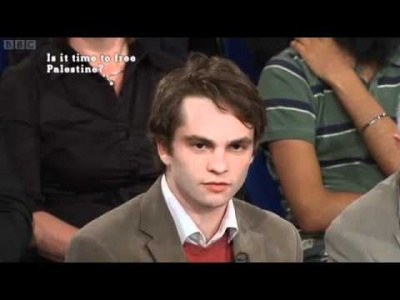 Sam Westrop is a right wing pro-Israel activist, a Freedom Association member and the founder and director of the Institute for Middle Eastern Democracy, the British Israel Coalition and Stand for Peace. He is currently director for research at the Americans for Peace and Tolerance.

Westrop was born in 1989[1] and studied music at York University where he also founded a Freedom Association society of which he was Chairman[2].

His writing has been published on Harry's Place[3] the Jerusalem Post[4], and the Freedom Association[5] website amongst others.

Westrop's father is libel lawyer Simon Westrop - head of legal at the major UK media group Newsquest. He was, according to an anonymous source with knowledge of Westrop's group Stand For Peace (SFP), an invaluable asset to his son's endeavours. Asked if he had helped his son Simon Westrop, would not deny offering informal legal advice to SFP but said it was a “family matter”, then claimed he knew “nothing about it”.[6]

In October 2009 Westrop was one of organisers of a Freedom Association society event at York University called 'Climate Week', designed to 'question the politics and ethics of climate change science', based on the belief that 'we do not know if anthropogenic climate change is occurring or not'.[7]

In July 2009 Westrop was listed as a speaker at the Freedom Association summer party alongside UKIP donor Stuart Wheeler, UKIP MEP Roger Helmer, Freedom Association member Lindsay Jenkins and Rev Dr Peter Mullen, a patron of Anglican Friends of Israel. The talk was part of the Association's 'Better Off Out' campaign which calls for Britain to leave the EU.[8]

In 2009 Westrop spoke at the Freedom Zone, a party conference fringe event organised by the Freedom Association[9] and at an Israel solidarity event in Germany in 2011 on what he called the 'green-red-brown' network - an 'unholy alliance' perceived to exist between Islamists, the far left and the far right against Israel.[10]

Westrop has written that the group, which works ‘to prevent both violent and non-violent extremism’ has worked 'closely' in the past with Student Rights, another anti-extremism pressure group concentrating on universities.[13]

An anonymous source with knowledge of Westrop's group Stand For Peace (SFP) claimed that the group's decision to register with Companies House was purely for legal rather than financial reasons. Due to its habit of labelling numerous people 'extremists', SFP has reportedly received at least one letter from media law firm Carter Ruck, the source alleged, but since it is incorporated no individual can be held legally accountable and its assets are so minimal it is not worth suing.[6]

Support from Baroness Cox and possibly the Gatestone Institute 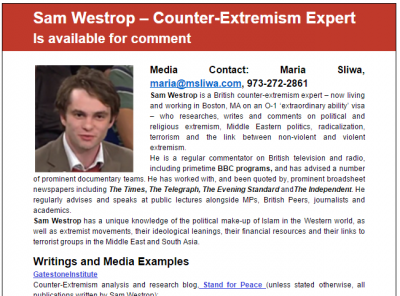 A PR firm's profile of Westrop, describing the twenty-six year old as a 'counter-extremism expert'

In 2013, Westrop produced a report called 'Don't Fund Extremism'. It was hosted on a mini-site linked to from the Stand for Peace website, which stated that - ironically - it had been "produced by the Gatestone Institute" and "with the support of the Gatestone Institute", an extreme, far-right anti-Muslim think tank. However, when contacted, by Spinwatch in 2015, Gatestone's Nina Rosenwald denied all knowledge of Stand for Peace and said her organisation's accountants had no record of giving financial support. Soon afterwards the references to Gatestone were removed. Westrop continues to write regularly for the think tank.[6]

The launch of the 'Don't Fund Extremism' report took place in the House of Lords, hosted by Baroness Cox, a UKIP-sympathising peer, in November 2013. UKIP's Lord Pearson was also present and Douglas Murray of the Henry Jackson Society spoke alongside Westrop. According to blogger Richard Bartholemew, a number of individuals from the Church of Scientology were present at the event.[14]

In 2009 Westrop and others co-founded the Institute for Middle Eastern Democracy[15], a 'think-tank and pressure group advocating liberty and democracy in the Middle East'[16].

In November 2011 Westrop produced a 'dossier' entitled 'An Evening with the PSC: Examining Racism, Extremism and Homophobia within the Palestine Solidarity Campaign', which accused a number of PSC activists of racism and suggested the organisation was homophobic and had links to the far-right. He has also asserted that people working within the PSC pass information about its activities to IMED.[17]

British Muslims for Israel and Stop the Bomb

Hasan Afzal and Westrop co-founded British Muslims for Israel – a project of the Institute for Middle Eastern Democracy.[18]

Westrop also reportedly started the British incarnation of a group called Stop the Bomb, described as a 'student-run pressure group' opposing an Iranian nuclear programme and calling for economic and political sanctions against the country.[19] It appears to be run from within IMED by Dan Coen.[20] 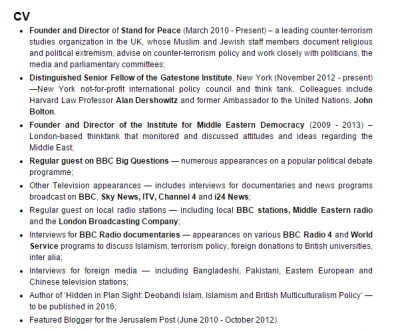 Westrop is also involved in the Jewish National Fund UK, according to the Jewish Chronicle, as a press officer.[24] He has written this about the organisation:

The anti-Lieberman Jews have signed petitions claiming that the JNF UK is doing everything from forcing the Bedouins from their homes to darkly working to ‘Judaize Jerusalem’. JNF UK, with which I am involved, does exactly the opposite. It has run projects with Bedouins before and is continuing to do so now, benefiting their communities in the Negev greatly. It is not involved in any dispute with Israeli Bedouins.[25]

Westrop has also been pictured lobbying Julian Brazier MP alongside members of the Shomron Liaison Office which advocates in favour of illegal Israeli settlements.[6]

Since 2012, Westrop has written regularly for the U.S. think tank the Gatestone Institute, where his articles target Islamic and leftist organisations and individuals.[26]. Westrop is also listed as a 'distinguished senior fellow' of the institute alongside far-right counterjihad movement activists such as Lars Hedegaard and Ingrid Carlqvist.[27]

Americans for Peace and Tolerance

The ultra-Zionist Charles Jacobs, who previously founded both CAMERA and The David Project, set up a new group called Americans for Peace and Tolerance (APT) in 2008. The ironically-named group, funded by - among others - hard-line Zionist billionaire Sheldon Adelson’s Family Foundation, has been accused of waging a “destructive campaign against Boston’s Muslim community based on innuendo, half-truths and unproven conspiracy theories”.

Though he is British, Westrop appears to have joined APT. He co-authored an article with Jacobs in September 2015 which described him as APT’s “Research Director”. The PR firm M Sliwa Public Relations, run by Maria Sliwa, promoted Westrop via email in December 2015 (see screenshot, above) stating that he now lives and works in Boston, USA, presumably with Jacobs' outfit.

A screenshot (above right), shows that the PR firm M Sliwa Public Relations promoted Westrop to the media as a potential spokesperson via email in December 2015. It described him as a 'counter-extremism expert' with a 'unique knowledge of the political make-up of Islam in the Western world', though it also included his CV (lower screenshot) which listed a number of media appearances but no relevant qualifications.

Westrop is also listed as a writer for Islamist Watch, a project of the anti-Muslim think tank, the Middle East Forum, which is closely associated with Nina Rosenwald's Gatestone Institute. His articles appear to be cross-posted in the National Review, and the Daily Caller. In early 2017 he was appointed its director.

Westrop has criticised major Israel lobby groups such as the Zionist Federation for not doing enough to organise counter-protests at anti-Israel demonstrations. He is quoted in the Jewish Telegraph as saying 'On the whole I have found the Jewish leadership appalling when it comes to Israel'.[28]

In the Jewish Chronicle Zionist Federation executive director Alan Aziz has responded by stating that Westrop "wants to promote himself", and argued that "egos" were hampering co-ordination of Israel advocacy work.[29]

Westrop wrote in July 2011 that a confrontational attitude should be adopted by Israel advocates:

[We] need to aggressively attack the very root of hatred and hypocrisy. We need to cut the head off the network of groups and ideologies that work to terrorize British Jewry. We cannot be insular and solely Jewish, but we must work with pro-Israel Muslims, Christians, atheists, liberals and conservatives - all of whom exist in ample numbers. We also cannot be territorial; the more groups the better. It is about being on the offensive – advancing with a spear rather then trembling behind a crumbling shield. It is about standing up for what is right rather than dithering over what is acceptable.[31]

In an article originally published on the Gatestone Institute website and prominently displayed on Stand for Peace's blog, Westrop downplays and denies the reality of Islamophobia and attempts to critique the late Palestinian-American scholar Edward Said, author of the seminal book Orientalism. His antipathy for Said is unsurprising given his own glaringly orientalist views, articulated after visiting Jordan and Syria:

I did not find the Arabs romantic. I found them interestingly hostile. A mentality of very irrational hatred was evident everywhere, venom regurgitated by government propaganda. Decades of despotic rule have kept a perpetual mob mentality. There is not the ability for the individual to think about what the reality of their relationship with Israel may be.[32][33]