From Powerbase
(Redirected from Zionist Federation)
Jump to: navigation, search

In 1917, the British Foreign Secretary Arthur James Balfour communicated the Balfour Declaration to the leader of United Kingdom's Jewish community Lord Rothschild for transmission to the Zionist Federation.

Among its aims and objectives, ZF lists:

The ZF does not reveal its membership list on its website. It has given various accounts of the extent of its membership. The holdings of the internet archive reveal that it has given the following accounts on its website. In 2001 it stated that it represented: 'most of the Zionist organizations and individuals in the country'.[4] In 2006 the Zionist Federation stated that it 'represents the UK Zionist Movement more than 120 organisations, and over 50,000 affiliated members.'[5] The figure of 120 was still on the website in 2012.[1] However in other sources, the ZF has claimed, by contrast, to have 'over seventy affiliated organisations' in 2010.[6] 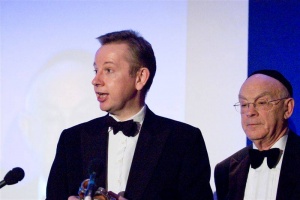 Mr. Gove was given the beautiful silver and glass award for his unrelenting support for the State of Israel. In accepting the Jerusalem Prize, Mr. Gove stressed that his love and passion was for democracy and since Israel was the only democracy in the Middle East, his support came naturally.[7]

The ZF has attacked Amnesty International UK on a number of occasions.

Paul Charney Chair - 'A solicitor and former IDF lieutenant... made aliyah from South Africa in 1986 and served in an armoured division of the Israeli army for four years until 1996... Mr Charney is a member of Conservative Friends of Israel and previously worked with the Jewish Association of Business Ethics'.[16] | Eric Moonman and former chair Harvey Rose will serve as joint presidents | Howard Ross and David Duke-Cohan as vice-chairs. Former vice-president Jonathan Hoffman was not re-elected | Director Alan Aziz[16]

The Zionist Review appears to have ceased publication around 1995. According to its editor Joseph Finklestone, in 1997, 'so meagre are the resources of the Zionist Federation that it is unable to publish regularly its famous journal Zionist Review.'[25]