Stand for Peace (SFP) was a British organisation engaged in 'exposing and fighting extremism'. It claimed to provide 'a platform for rational discussion of the Middle East' and 'challenge[d] the extremism that additionally manifests right here in Britain, especially in our universities.'

In 2017 founder Sam Westrop and SFP were successfully sued for defamation by Mohamed Ali Harrath, a Tunisian dissident who had been tortured and imprisoned by the Ben Ali regime. The judge decided SFP’s description of Harrath as a ‘convicted terrorist’ was libellous.

Although Stand for Peace’s website remains online, Companies House records show that its co-founder Sam Westrop resigned as its sole remaining director in August 2016 and the company was dissolved in June 2017. [1]

Westrop now works as director of the US-based 'Islamist Watch' project of the Middle East Forum run by Daniel Pipes.

In February 2011, Westrop wrote in a Jerusalem Post blog:

StandforPeace is a new project - designed by students, policy makers and political activists – to bring moral clarity to the discussion of human rights, in particular with regards to the Middle East. We also exist to fight extremism in our universities, whether it is perpetuated by Islamist ideologues, the far right, the Palestinian Solidarity Movement or any of the delegitimisation network.[3]

It claimed to consist of 'students and young professionals' and said it aims to 'prevent both violent and nonviolent forms of extremism through education and awareness raising'.[4]

Stand for Peace's website features a selection of what it calls 'extremist photos', including students, activists and Muslim preachers and listing left-wingers alongside English Defence League leader Stephen Lennon.

Westrop has said that Stand for Peace has worked 'closely' in the past with Student Rights, another British anti-extremism pressure group concentrating on universities.[6]

In June 2012 Stand for Peace and the Institute for Middle Eastern Democracy - another organisation co-founded by Sam Westrop - were among the groups involved in pressuring the Grand Connaught Rooms in London to cancel a Ramadan conference organised by the Al-Muntada Trust since they claimed it featured 'extremist' speakers. Stand for Peace director Hasan Afzal claimed victory when the conference was cancelled but acknowledged that far-right groups had also joined the campaign[7].

The English Defence League, Casuals United[8] and British National Party all lent their support to the campaign, the latter republishing a Stand for Peace briefing approvingly[9]. It is not clear whether the venue's safety concerns which prompted it to cancel the conference on the advice of the police were connected to the scheduled speakers or in fact to the possibility of opposition from these far-right groups.

Stand for Peace was also instrumental in the banning of several speakers from a Palestine Forum in Britain event in Manchester.[10] 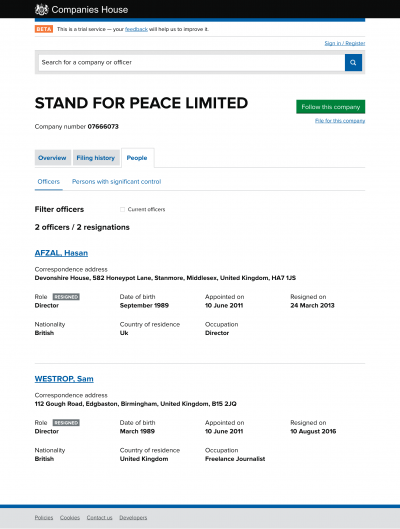