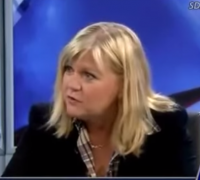 Ingrid Carlqvist is a Swedish journalist and counterjihad activist, editor-in-chief of Dispatch International and founder and president of the Swedish Free Press Society.

She spoke at the Brussels Counterjihad 2012 conference.

At the conference the launch of Dispatch International, intended to be a mouthpiece for the counterjihad movement, was announced. It is believed to have been founded by Carlqvist with Lars Hedegaard.[3] Carlqvist's LinkedIn page states that she had been 'editor in chief' since 2012.[1]

She has interviewed many other counterjihad activists for Dispatch International, including Henrik Rönnquist[4] and Tommy Robinson.[5]

In June 2014, she chaired an event in Copenhagen to launch a Swedish edition of Lars Hedegaard’s book 'Muhammad’s Girls: Violence, Murder and Rape in the House of Islam' that also featured Anne Marie Waters, from Sharia Watch UK and Nicolai Sennels, who would later start Pegida Denmark.[6]

In an interview with the website Jihad Watch in February 2012 Carlqvist reportedly claimed that 'Islam is one of the greatest threats to free speech in the world today.'[2]

She has also reportedly spoken of her dislike of Islam and immigration in racial as well as cultural terms, claiming that Europe is threatened by immigrants that have 'a lower IQ'.[3]