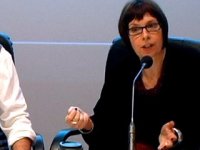 Kathryn Ecclestone is Professor of Education and Social Inclusion in the School of Education at the University of Birmingham and is associated with the libertarian anti-environmental LM network. She has written for Spiked [1] and Culture Wars (in November 2008 and October 2009) [2] ,spoken at the Battle of Ideas, [3] adjudicated for Debating Matters, co-written a book with Dennis Hayes, spoken at the Brighton Salon and is a founder member of the Birmingham Salon.