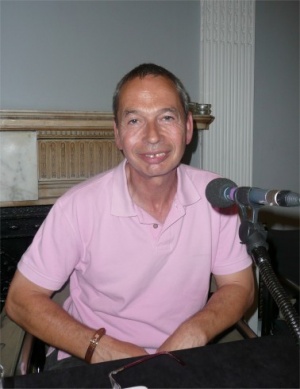 Frank Furedi (originally called Ferenc Füredi, Dob 3 May 1947) is professor of sociology at the University of Kent at Canterbury, UK and a leading associate, perhaps the leading associate, of the LM network. He was, under the pseudonym Frank Richards, a leading member of the Revolutionary Communist Group, then, having been expelled from the RCG, the founder and chairman of the Revolutionary Communist Tendency, later the Revolutionary Communist Party (RCP). The RCP has traversed one of the longest ideological journeys in British politics, moving from the what it described as 'ultra-left', through several incarnations into a broad collection of organisations on the libertarian right wing, including Spiked Online and the Institute of Ideas. Furedi continues to be a leading figure in this network of organisations, characterised by a vigorous anti-environmentalist, pro-GM stance, known as the LM network. 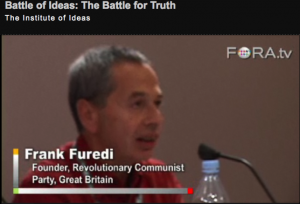 Frank Furedi speaks at the Battle of Ideas, organised by the Institute of Ideas in 2008. Note the unusual caption naming Furedi as the 'founder' of the Revolutionary Communist Party

Aside from his academic work, he is frequently quoted in the media as an expert on how our society has become obsessed with risk. He writes regularly for Spiked Online, and has written several books on the subject, with titles such as Paranoid Parenting, Therapy Culture, and Culture of Fear. He wrote an article about risk culture post September 11, one of only two papers published by Global Futures. Furedi also writes a column for the Times Higher Education supplement.[1]

Furedi has also written under the 'Party' names of Frank Richards and Linda Ryan.[2] He was born in Hungary in 1947. His family emigrated to Canada after the Soviets crushed the 1956 uprising. He has lived in Britain since the 1970s but remains a Canadian citizen. [3] He is married to Ann Furedi.

In Quebec and the student movement in the 1960s

In 2008 Furedi gave the following account of his short career as a student radical:

In October 1967, I returned to McGill University in Montreal for my third year of a political science undergraduate course. Compared with most student activists, I was not particularly radical. However, I had resolved to no longer put up with the tedious political lectures on offer in my course. At this time, political science seemed to have taken refuge in the lifeless, uninspiring models of ‘participation’ and ‘behaviour’. After two years of dull institutional analysis, I was ready for something a bit stronger, a bit more meaningful.

Without really knowing why, I found myself at the launch meeting of a student Political Science Association. Everyone was talking about the need for a major reorientation of our study programme. Students were demanding a more intellectually stimulating course of political science – one that was more radical and more engaged. Again, I don’t how or why I got up to speak in public for the first time in my life – but by the end of the meeting I found myself elected to the executive of the newly formed PSA. My short career as a student radical was about to begin.

Campus radicalisation appeared to develop effortlessly. Without very much exertion we organised a series of meetings, and in November 1967 we got the majority of political science students to vote for an occupation of the floor of the building where our teachers’ offices were based. The occupation successfully forced some concessions from the university, and left us all with the impression that taking this kind of direct action was the way forward. More importantly, everyone involved in the occupation experienced a real sense of elation, which further reinforced our conviction that ‘anything and everything is possible’. In the succeeding months, I was involved in a series of strikes and demonstrations, which won the support of large numbers of students and gained some quite considerable media coverage and publicity.

...I was soon reminded that it was easier to talk about than to realise change. In August 1968, the so-called Prague Spring was brought to an end through the exercise of Soviet military power. The popular movement for democracy, which showed so much potential, was swiftly repressed. Anything was not possible, it seemed, in Eastern Europe – or in the West, either, as I would soon discover.[4]

It was the crushing of the Prague Spring that turned Furedi away from student radicalism. In the telling of the story in 2008 he emphasises that it was the lifestyle politics that put him off, the obsession with individual transcendance as opposed to material change:

After Prague, I ceased to think of myself as a student radical. As a child, I lived through the Hungarian Revolution of 1956, which means I experienced the crushing of the Prague experiment as an intensely familiar tragedy. All of a sudden, Sixties radicalism appeared empty of ideas, and I started to find its rhetoric extremely irritating. With the ascendancy of lifestyle politics, it was difficult to avoid noting the powerful anti-intellectual currents that sprung from the soul of Sixties radicalism. I wasn’t interested in ‘changing my head’ – I wanted to change the world around me.[4]

But for Furedi, changing the world did not mean re-engaging with the movement. It meant as he says in his next sentence: 'So at the end of the Sixties, I began to sense that rather than talk the talk, I had to sort out my ideas.'[4] And it was to ideas that he looked for the next four years. Indeed, arguably, it was ideas which he came to see were the motor force of revolutionary change and which formed the basis for the programme of the Revolutionary Communist Tendency in 1977/78.

Furedi moved to London in 1969 at the age of 22 and undertook an MA in African Politics at the School of Oriental and African Studies in 1969/70. Between 1970 and 1974 again at SOAS he studied for a PhD Titled: The Mau Mau Revolt in Perspective[5]. His work led to early academic publications on popular movements and land reform in Kenya in 1973-4.[6] At some point between 1969 and Spring 1973 Furedi joined the International Socialists and was expelled along with the rest of the faction known as the 'Right Opposition' in spring 1973.[7] The grouping called itself the 'Revolutionary Oppostition'.[8]

Furedi's faction claimed that the IS had an 'economistic' perspective.[8] According to leading IS members the faction that became the RCT espoused a kind of 'paleo-Marxism' which displayed 'an obsession with the letter of the marxist classics which often lost sight of the method which informed these works'.[7] According to the account of Alex Callinicos this faction:

were highly critical of mere involvement in the practical struggles of the day(the greatest Britain had seen since the 1920s) and argued that priority should be accorded to the formulation of the correct marxist programme; practically,they were highly suspicious of any attempt to modify the organisation's geographical structure by introducing factory branches and were afraid that an influx of workers into IS would dilute its politics (none too hot at the best of times, on their account). After an internal debate notable for its abstruseness (one of the main issues rested on the interpretation of Capital Volume 3 and the IS bulletin was for a time full of simultaneous equations) IS and the Right Opposition parted company.[7]

Furedi's exit from the RCG

In 1975 Furedi (using the name Frank Richards) was listed as a member of the editorial board of the RCG theoretical journal Revolutionary Communist at the time of issue number two dated May 1975. 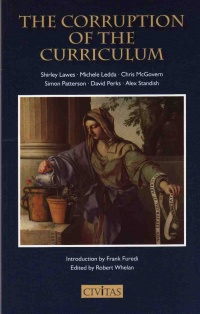 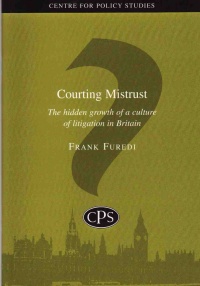 Furedi writing for the Thatcherite Centre for Policy Studies. Apparently no contradiction for a former Marxist or a contemporary liberal humanist