<youtube size="medium" align="right" caption="Alexander Meleagrou-Hitchens discusses the Taliban's UK funding on Sky News">b7gLvOgeCbU</youtube> Alexander Meleagrou-Hitchens (born 1984) is an American think tank researcher who undertook his higher education in London and according to the Policy Exchange has worked in US right wing and neoconservative think tanks, though it is unclear when.[1] Since 2007 he has worked - in particular on Islam - successively at Standpoint, Policy Exchange and the Centre for Social Cohesion.[2] He is a contributor to the Weekly Standard[3], Hudson Institute[4] and Henry Jackson Society's The Scoop blog.[5] He is the son of the journalist Christopher Hitchens.

Meleagrou-Hitchens was born in 1984 and finished eighth grade at the Capitol Hill Day School in Washington DC in 1998 at age 14. He presumably therefore left High School in 2001. He subsequently gained a BA in Classics from Kings College London.[6] He signed the Unite Against Terror manifesto in 2005.[7]

Meleagrou-Hitchens' Policy Exchange biography states that he took a Masters in International Relations at Brunel University.[8] According to Brunel, this was a Master of Arts degree in Intelligence and Security Studies awarded in 2008.[9] This course is taught by the Brunel Centre for Intelligence and Security Studies and the course director was Anthony Glees (though he left Brunel in 2008 and was replaced by Dr Philip H J Davies).[10] 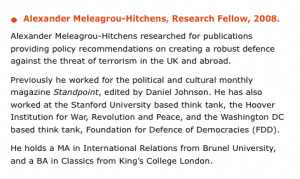 At some point he is reported to have worked at Standpoint, the magazine launched by the Social Affairs Unit (the think tank which published the manifesto of the British neoconservative Henry Jackson Society) - prior to joining Policy Exchange in 2008.[11] But since Standpoint only began publishing in June 2008, this must have been for a short period. He worked at the Policy Exchange in 2008 where he was involved in work on 'security and terrorism' including in September 2008 writing their controversial briefing on the Global Peace and Unity event in London.[12]. By October 2008 he had moved on to the Centre for Social Cohesion headed by Douglas Murray author of Neoconservatism: Why we need it. From here he became involved in blogging at the Centre for Social Cohesion and also at the Daily Telegraph, the Henry Jackson Society and Harry's Place, appearing in the tabloid press as an 'expert' on Al Qaeda in early 2009.[13]

Meleagrou-Hitchens runs Standpoint magazine's Focus on Islamism blog. His biography on Standpoint's site was updated in September 2010, describing him as a Phd student at Kings College London.[14] Ironically, in a article for Slate in October 2010, Christopher Hitchens derided Standpoint as 'a monthly that ingeniously manages to unite both Zionist and Roman Catholic conservatives.'[15]

In 2005 while still an undergraduate at King's College London, Meleagrou-Hitchens signed the Unite Against Terror manifesto. In his statement of support he noted that:

After the events of 9/11 it became clear to many in the US and UK as well as a number of other countries that the West had to abandon its policy of containing Islamic fascists in the countries that harbored them. A more active and decisive policy had to be implemented. This has resulted in the liberation of both Afghanistan and Iraq from the manacles of oppressive regimes that not only openly supported such acts as 9/11, but also aided and abetted those who were prepared to carry out further atrocities in the Arab world and in the West. Those who hold the view that the liberations of the aforementioned states has led to an increased threat from Islamofacist terrorists need only look at statements made by Al-Qaeda and its sympathizers. Their Nazi-like views regarding homosexuals and, among other things, their grievance at women being uncovered in public, have been constant since they were established, well before any troops had stepped foot in Afghanistan or Iraq. In addition they see the pull out of foreign troops from Muslim land as simply the beginning of the establishment of an Islamic super-state ruled under Sharia law, prepared to re-conquer what they see as formerly Muslim lands. Thus in giving in and looking to negotiate with such people, we will only strengthen their position and assist them with their future aims. In joining this website I hope to help promote the worldwide fight against fascism in its newest form.[16]

In October 2008, Liberal Democrat leader Nick Clegg criticised Policy Exchange in a letter to its director Neil O'Brien for briefing against the Global Peace and Unity event in London.

The Policy Exchange briefing I have seen seeks to raise alarm over a number of the speakers planning to attend the conference. The accuracy of the allegations is variable, with a notable lack of evidence to support many of the claims.

In particular I was appalled to see ‘evidence’ quoted from the Society for American National Existence, an organisation which seeks to make the practice of Islam illegal, punishable by 20 years in prison. I need hardly point out how illogical it is to attempt to criticise one set of extreme views by citing another.

My concern is not limited to the facts in the document, however. Your attempt to raise a boycott of this event by privately briefing against it is bizarre, and underhand behaviour for a think-tank supposedly interested in open public debate. The information you are disseminating is extremely narrow in focus and as a result tars with the brush of extremism the tens of thousands of Muslims who will be in attendance.[17]

The Policy Exchange briefing also referenced an article by Patrick Poole in FrontPage Magazine. The briefing itself is a word document and the 'properties' of the file list Alexander Meleagrou-Hitchens as its author and state that the document was created on 19 September 2008 at 14.20.[18] The document seems to have been written between the 4 September and the 19 September 2008 as this is when almost all the references in the document (to internet locations) are said to have been accessed.[19]

In February 2009 he was cited by the Daily Mail:

Yesterday, the Mail revealed how the Home Secretary was facing demands to deny a visa to Ibrahim Moussawi - a spokesman for the Lebanese terrorist organisation Hezbollah - to come to speak at a British university. Now it has emerged that the lectures Moussawi plans to deliver are targeted at Whitehall officials who deal in foreign affairs and extremism. They will each spend up to £1,890 of taxpayers' cash attending the Political Islam event at the University of London's School of Oriental and African Studies (SOAS) next month. Moussawi - who is among the key speakers at the week-long course - is scheduled to address two sessions on March 25 and is expected to be paid for the talks.

Another speaker at the event is the UK-based extremist Dr Kamal Helbawy, a former spokesman for the Muslim Brotherhood - a group said to have inspired Al Qaeda. Last night, Alexander Meleagrou-Hitchens, a researcher for the Centre for Social Cohesion, a respected think-tank, said: 'In their willingness to pay extremists like Dr Helbawy and Dr el-Moussawi, SOAS are helping these men present themselves as mainstream figures. 'It is particularly worrying that the target audience includes Government officials and the police, who may find themselves paying for advice on tackling terrorism from its very exponents.' The CSC said it was now imperative Miss Smith ban Moussawi, who has allegedly called Jews 'a lesion on the forehead of history'.[20]

In March 2009, he denounced the BBC for reporting the views of alleged torture victim Binyam Mohamed:

BBC chiefs were attacked last night for giving former Al Qaeda suspect Binyam Mohamed a public platform without demanding answers about his alleged terror links. The freed Guantanamo Bay detainee was allowed to brush aside questions during a radio interview about the time he spent in Afghanistan. He refused to explain his movements at the time of his arrest seven years ago or who told him to go to the region. Instead, Ethiopian-born Mohamed, 30, repeated claims he had been tortured by agents acting for British intelligence . Last night, ministers were said to be privately furious at the "soft" interview broadcast yesterday morning on Radio 4's Today programme...

Al Qaeda expert Alexander Meleagrou-Hitchens, a senior researcher at the Centre for Social Cohesion think-tank, said: "The BBC's responsibility is to licence-payers. Really, they didn't press him hard enough on the issue of whether he had been to a training camp. "They asked him but when he didn't give a straight answer, they didn't give him the kind of interview Jeremy Paxman would give a politician. "He didn't give a straight answer. He even denied knowing what an Al Qaeda operation was. These are tactics straight out of an Al Qaeda manual. "What concerns me is how they put the emphasis on his torture allegations and ignore allegations that he trained in an Al Qaeda terror camp. "What we are doing is putting the word of someone who has admitted being in a suspicious environment above that of the US government. "It just seems to be an orchestrated move to show that the UK and the US government are as bad or worse than Saddam Hussein's government."[21]

One of the 'Saeed Watchers'

A frequent focus of Hitchens's attention has been SNP Glasgow candidate Osama Saeed. Hitchens has described himself as one of the 'Saeed watchers'.[22]

Criticism of the counter-jihad movement

In an October 2010 article for his Standpoint blog, Meleagrou-Hitchens criticised the links between the English Defence League and US counter-jihad bloggers such as Pamela Geller. He went on to endorse a comment by the leading US neoconservative Daniel Pipes, which complained that:

Misled by the Islamists’ insistence that there is no such thing as ‘moderate Islam,’ my allies often fail to distinguish between Islam (a faith) and Islamism (a radical utopian ideology aiming to implement Islamic law in its totality). This amounts not just to an intellectual error but a policy dead-end.[23]

In March 2013, he co-authored a report for the International Centre for the Study of Radicalisation and Political Violence, entitled A Neo-Nationalist Network: The English Defence League and Europe’s Counter-Jihad Movement.[24]