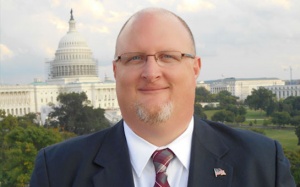 Patrick Poole is a national security and terrorism correspondent for the US-based PJMedia, sometimes described as a 'radical Islam expert'. He runs the Unconstrained Analytics website with Stephen Coughlin.

An article by Poole in FrontPage Magazine was cited by the British think tank Policy Exchange in a private briefing against the Global Peace and Unity event in London revealed in October 2008.

Honestly, I don’t know much about Geert Wilders’ politics. I only met the man briefly, and I heard his stump speech twice on Friday. But anyone who has a stack of fatwas calling for his death because of his willingness to speak out against the global jihad is going to receive my support, regardless of any politically incorrect view he may or may not hold.[2]