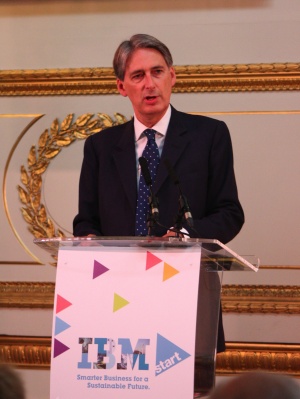 Philip Hammond was appointed as Chancellor of the Exchequer by new Prime Minister Theresa May on 13 July 2016 having left his appointment as UK Foreign Secretary which he held since 2014.[1]. He has been the Conservative Party MP for Runnymede and Weybridge since 1997. [2]

The 2015 general election proved successful for Hammond who retained his seat with a majority of 22,134, [3] and was reappointed foreign secretary. [4]

According to a Ministry of Defence bio:

Mr Hammond was raised in Essex, attending school in Brentwood before going on to read Politics, Philosophy and Economics at University College, Oxford. Prior to his election to the House in 1997, he followed a business career in small and medium-sized companies in manufacturing, consultancy, property and construction and oil and gas, both in the UK and abroad.[6]

A seating plan of the Conservative Party's Black and White Ball, in February 2014, was leaked to the Bureau of Investigative Journalism in October 2014. The party, which guests pay between £450 and £1000 for a ticket, seats diners with the minister most relevant to them. Listed as being on Hammond's table was Kevin Lomax, who is chairman of two companies, including Ipsotek. [9]

Details of the Conservative's 2013 summer ball, where tickets cost up to £12,000 each, were also leaked. It revealed Hammond shared a table, paid for by Lord Clanwilliam, a PR adviser who works for the government of Bahrain, with Afnan Al-Shuaiby, the head of the Arab British Chamber of Commerce.[10]

On 9 February 2015, Hammond attended the Conservative Party's 'Black and White Ball' election fundraiser at the Grosvenor Hotel in London. The event was attended by almost the entire Cabinet, Boris Johnson and George Osborne did not attend due to the G20 event, and by party donors including; hedge fund boss Stanley Fink (Lord Fink), who wants Britain to rival offshore tax havens with an equally generous tax regime; founder of Lycamobile, who paid no corporation tax between 2007 and 2014 despite generating millions in revenue, Subaskaran Allirajah; jewellery tycoon Ranbir Singh Suri and lap dancing club owner Peter Stringfellow.

To raise additional money at the event, the Party sold one off prizes. These included, shoe shopping with Theresa May, a meal at the Carlton Club with Sajid Javid, dinner at home with Michael Gove and a session of jogging with Nicky Morgan.[11]