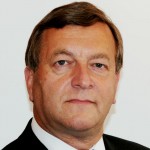 In his last military appointment, Applegate was the first Chief of Materiel (Land) in the Defence Equipment and Support organisation and a member of the leadership board of the British Army for three years, latterly as Quartermaster General.

Applegate left the UK armed forces in 2010.[2]In December 2010 he was appointed an associate member of Niteworks, a partnership between the UK Ministry of Defence, including the Defence Science and Technology Laboratory, and industry.[3]

Applegate was later appointed the chairman of Israeli arms firm Elbit Systems UK in May 2011.[4] He is also in charge of Business Development at Remitia since 2015. [5]

In 2012, Applegate was one of a number of retired senior army officers targetted in a sting operation by Sunday Times journalists posing as representatives of a Korean drone manufacturer.[6]

Applegate was reportedly involved in a campaign to secure a £500 million contract for Israeli arms firm Elbit Systems.[7] The Sunday Times reported:

He confided that he used Westminster Connection, a discreet lobbying firm with Israeli links, as a "firebreak" to ensure "that my fingerprints weren't over any of it". It could gain access to anyone "from the Prime Minister down". He said the firm, based in Victoria and co-owned by Scott Hamilton, a former Conservative staffer, had used its links with Conservative Friends of Israel (CFI) to persuade MPs in the Commons to assist him in his campaign.[7]