The Defence Science and Technology Laboratory is a UK government agency under the umbrella of the Ministry of Defence. It was created from the remainder of the Defence Evaluation and Research Agency when that body was part-privatised to form Qinetiq. 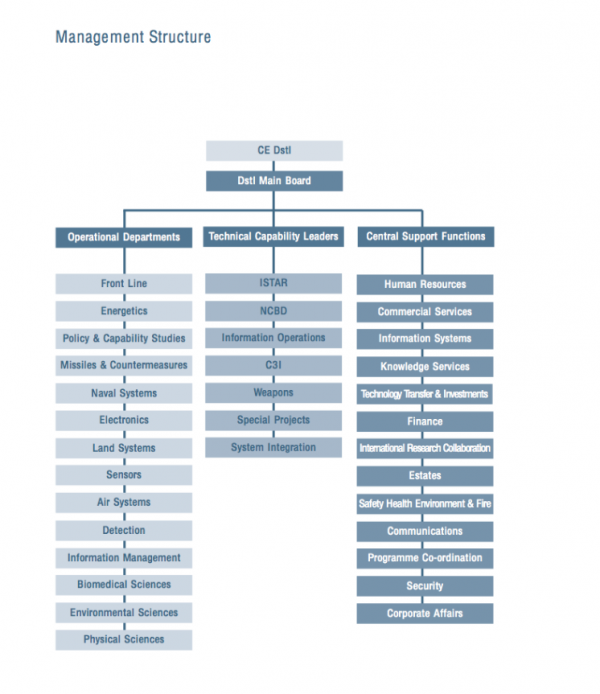 The prime function of the group is to provide information and communication technologies (ICT) security advice and services across HMG. This covers all phases from protection through resilience and response into recovery. The group is also the co-ordination centre for research into Information Operations across Dstl tasking across the organisation, industry and academia as appropriate. The group is strongly technology based exporting its’ expertise into systems areas across Dstl as well as directly to the customer base.[3]

Dstl’s Strategic Analysis Group exists to help decision makers, principally within the MOD but also other areas of Government, such as the intelligence community and the Home Office, to assess, manage and prepare for future strategic defence and security challenges. The Group achieves this through taking a holistic, structured, rigorous and analytical view, eg appraising the strategic challenges likely to be faced by the UK and the UK’s Armed Forces over the next twenty years. In particular, the Group draws the social and cultural dimension into all areas of work.

In order to fulfil this role, the Group employs analysts from a diverse and wide range of backgrounds, in order to allow for holistic analysis to be undertaken. These backgrounds include: psychology, anthropology, operational research, management science, war studies, international relations / strategic studies, geography, law, political science, intelligence analysts and social network analysts.[4] The Group consists of five teams:

The following were listed as working at DSTL (with their paper title) at the Cranfield University Information Operations and Influence Activity (IOIA) Symposium in 2008:[7]

A collection of documents by or about the DSTL is available on Scribd: DSTL documents