The Salons debating initiative is associated with the libertarian anti-environmental LM network. The first salon was founded in New York in 2005. [1] The first salon in the UK was Brighton in 2005: "The Salon revival began in 2005 when the Brighton Salon was launched by Dan Travis, Sean Bell and Rob Clowes." [2] The three comprised a book club reading Capital Vol. 1. [3] Manchester Salon was launched in 2006: "The Manchester Salon was inspired after a trip to London for the Battle of Ideas in 2006, and a desire to bring some of the flavour of those very engaging debates to Manchester - at least in between the annual Battle of Ideas festival."[4] The Salons are described by the Institute of Ideas which promotes their events as “inspired by the Institute of Ideas and run independently by groups and individuals across the country.” [5] Their organisers, speakers, themes and views are typical of the LM network and they in turn promote entities associated with the LM network such as the Battle of Ideas, Culture Wars, Institute of Ideas, Manifesto Club and Spiked. The Dublin Salon was launched in early 2015.

The Salon registered its URL: dublinsalon.org on 6 November 2014. 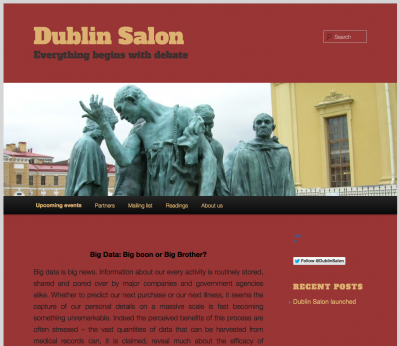 The Dublin Salon does not advertise who is associated with it. Its website registrant has used 'Domains by proxy' to ensure that the identity of the registrant is not public: 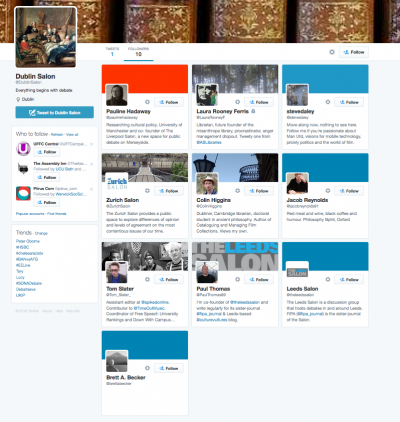