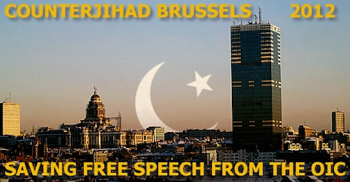 The Brussels Counterjihad Conference was held on 9 July 2012 in the Altiero Spinelli building of the European Parliament.[1]

It was billed as an 'International conference for free speech & human rights' and sponsored by the International Civil Liberties Alliance.[2]

Leaders of the counterjihad movement had also met in the city five years before for Counterjihad Brussels 2007.

Participants issued the so-called Brussels Declaration, which according to one of its advocates is 'a resolution designed to stand in contrast to the 1990 Cairo Declaration of Human Rights in Islam' and designed to present 'our politicians and their media cheerleaders with the stark facts — that Islamic law violates the central precepts of both individual liberty and human rights as the West understands them' in order 'to shine a light on the betrayal of our nations by the elites who govern them.'

An initiative called the Brussels Process was also launched 'as a counterpoint to the Istanbul Process', which has been launches to combat religious intolerance in 2011 by the Organization of the Islamic Conference OIC).[1]

According to the blogger Fjordman, representatives of 18 countries, the majority from Europe but also including the participation of Coptic Christians from Egypt, attended.[3] He also claimed that 'more people attended this meeting than any other since the previous Brussels meeting in 2007'. [4]