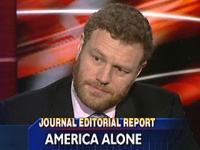 Mark Steyn (born 1959 in Toronto) is a far right Canadian commentator, author of bestselling books, and a leading proponent of the Eurabia concept, which portrays Europe as under the threat of being subsumed by Muslim/ Arabic culture. [1].

According to neoconservative Irwin Stelzer, George W. Bush had read and recommended to his staff and friends Steyn's Islamophobic bestseller, America Alone: The End of the World As We Know It.[2] Steyn makes frequent appearances on Fox News, and on radio shows such as those of Rush Limbaugh and Hugh Hewitt.

Steyn began his career as a musical theatre critic for The Independent in 1986. He was appointed film critic for The Spectator in 1992. After writing predominantly about the arts, Steyn's focus shifted to political commentary and moved to the conservative broadsheet The Daily Telegraph which stopped carrying his column in 2006. Since then, he has written for a wide range of publications, including the Jerusalem Post, The Orange County Register, Chicago Sun-Times, National Review, The New York Sun, The Australian, Macleans, Irish Times, National Post, The Atlantic Monthly, Western Standard and New Criterion.

Mark Steyn believes that Eurabia – a future where the European continent is dominated by Islam – is an imminent reality that cannot be reversed. 'The problem, after all, is not that the sons of Allah are 'long shots' but that they're certainties. Every Continental under the age of 40 – make that 60, if not 75 – is all but guaranteed to end his days living in an Islamified Europe.'[3] 'Native white populations on the continent are aging and fading and being supplanted remorselessly by a young Muslim demographic.'[4] Steyn claims that Muslims will account for perhaps 40 percent of the population by 2020.In his book America Alone, Steyn posits that Muslim population growth has already contributed to a modern European genocide:

Why did Bosnia collapse into the worst slaughter in Europe since the second World War? In the thirty years before the meltdown, Bosnian Serbs had declined from 43 percent to 31 percent of the population, while Bosnian Muslims had increased from 26 percent to 44 percent. In a democratic age, you can't buck demography — except through civil war. The Serbs figured that out, as other Continentals will in the years ahead: if you cannot outbreed the enemy, cull 'em. The problem that Europe faces is that Bosnia's demographic profile is now the model for the entire continent.[5]

In a few years, as millions of Muslim teenagers are entering their voting booths, some European countries will not be living formally under sharia, but -- as much as parts of Nigeria, they will have reached an accommodation with their radicalized Islamic compatriots, who like many intolerant types are expert at exploiting the "tolerance" of pluralist societies.[6] 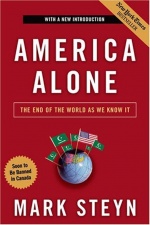 In 2006 Steyn's rabidly Islamophobic book America Alone became a New York Times bestseller, and also made it to George W. Bush's reading list. In the book Steyn lists three factors that have 'left Europe too enfeebled to resist its remorseless transformation into Eurabia and that call into question the future of much of the rest of the world...: demographic decline; the unsustainability of the social democratic state; and civilizational exhaustion.'In an overview of the book journalist Jim Lobe writes that it

sees Europe's demographic trends and its multicultural, "post-nationalist" secularism - of which his native Canada is also guilty - as leading inevitably to the "Eupocalypse", the "recolonisation of Europe by Islam", the emergence of "Eurabia", and the onset of a "new Dark Ages" in which the United States will find it difficult to survive as the "lonely candle of liberty."

Steyn, who admits that he would have to drive three hours from his home in thankfully "undiverse" New Hampshire to find a Muslim, sees Islam itself - and not just "Islamist radicals" or "jihadis", such as al Qaeda - as a unique threat that cannot be reconciled with "free societies".

"[I]t's not merely that there's a global jihad lurking within this religion, but that the religion itself is a political project - and, in fact, an imperial project - in a way that modern Christianity, Judaism, Hinduism, and Buddhism are not," he writes. "Furthermore, this particular religion is historically a somewhat bloodthirsty faith in which whatever's your bag violence-wise can almost certainly be justified."

To deal with the threat, he calls for a familiar recipe of favourite neo-conservative policies, from "support women's rights in the Muslim world" and "wage ideological war", to "end the Iranian regime" and "strike militarily when the opportunity presents itself." [7]

On the social democratic state

According to Steyn one reason why Islam might vanquish the West is the social democratic state:

The state has gradually annexed all the responsibilities of adulthood -- health care, child care, care of the elderly -- to the point where it's effectively severed its citizens from humanity's primal instincts, not least the survival instinct...Big government is a national security threat: it increases your vulnerability to threats like Islamism, and makes it less likely you'll be able to summon the will to rebuff it.[8]

After giving the example of Japan where according to Steyn the number of deaths exceeded births, he laments that while it is not all that bad that we are losing people,

The difficulty, in a modern social democratic state, is managing which people to lose[9]

For Steyn Muslims present a 'demographic' threat. Regarding its impact on the industrial future he writes,

In the industrial age, manpower was critical. In the new technological age, manpower will be optional -- and indeed, if most of the available manpower's Muslim, it's actually a disadvantage.[10]

The question for today's Europe is whether the primary identity of their fastest-growing demographic is Muslim or Belgian, Muslim or Dutch, Muslim or French...[11]
On the Continent and elsewhere in the West, native populations are aging and fading and being supplanted remorselessly by a young Muslim demographic.

Steyn then proceeds to ridicule what he calls the 'obligatory "of courses"':

of course, not all Muslims are terrorists -- though enough are hot for jihad to provide an impressive support network of mosques from Vienna to Stockholm to Toronto to Seattle. Of course, not all Muslims support terrorists -- though enough of them share their basic objectives(the wish to live under Islamic law in Europe and North America)to function wittingly or otherwise as the "good cop" end of an Islamic good cop/bad cop routine. But, at the very minimum, this fast-moving demographic transformation provides a huge comfort zone for the jihad to move around in.[12]

On the fall of the Berlin Wall

Steyn's offers his novel sense of Euphoria at the fall of the Berlin wall:

it was hard not be moved by the crowds sweeping through the Berlin Wall, especially as so many of them were hot-looking Red babes eager to enjoy a Carlsberg or Stella Artois with even the nerdiest running dog of imperialism.[13]

He then goes on to aver that the citizens of France or Italy deserved no part of the glory since they were complicit with Communism: 'millions of them voted for it, year in, year out.'[14]

In December 2007 Steyn was the center of controversy when the Canadian Islamic Congress filed a complaint with the Canadian Human Rights Commission against Maclean's magazine for publishing 18 articles between January 2005 and July 2007, including an excerpt from America Alone,[15] that it deemed Islamophobic. The Canadian Human Rights Commission eventually dismissed the complaint on June 26, 2008 without referring the matter to a tribunal.[16]