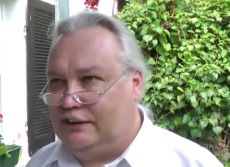 His other counterjihad movement activism includes speaking at a number of its annual conferences and claiming to have revived the Weiße Rose (White Rose) movement.

'Revival of the White Rose'

In July 2012, Meier was one of eight 'Islam critical' activists who claimed to be reviving the anti-Nazis resistance White Rose (Weiße Rose) movement, active between 1942-43.

In an interview, he claimed that 'today through historical misrepresentation' the original White Rose movement was 'being pushed into proximity with so-called anti-fascists' and actually 'was a national-conservative, liberal movement'.

The attempt to reclaim anti-fascist history for the far-right in the context of the level of stigma associated with Nazism in Germany, given its history, pre-figured the rhetoric of the anti-Islam movement PEGIDA, which emerged in 2014 and produced a logo showing the swastika being thrown in the bin along with the flag of Islamic state, the Communist hammer and sickle and also the symbol of the Anti-Fascist Network.

Meier spoke at the Counterjihad Brussels 2012 conference, on 9 July, giving a speech entitled 'The Crossroads of History'.

His speech concerned the alleged threat of 'Islamisation' and compared the Muslim minority of Germany to the relatively small number of party members in Hitler's NSDAP, prior to his rise to power.

He also stated that 'the Western world is not yet lost at all. We do still keep hope for a bright future. But we must fight for it'.[2]

Meier was a delegate at the Counterjihad Zurich 2010, the fourth annual transnational conference of the counterjihad movement, held on 12-13 June.[3]