Difference between revisions of "Manjit Kumar" 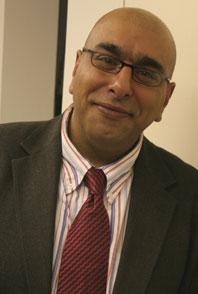 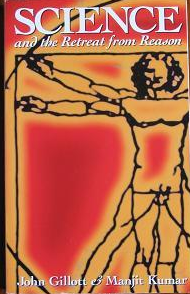 John Gillott and Manjit Kumar, Cover of the 1995 edition of their Science and the Retreat from Reason. 'It is difficult to understand', wrote one reviewer 'how a book that began with such a brilliant defense of science and reason... could lead in the end to such a state of unreason'

Manjit Kumar is a science writer somewhat associated with the libertarian anti-environmental LM network, having written for Living Marxism (on some occasions under the name Manjit Singh, for example in the first issue of the magazine in 1988),[1] co-authored a book with John Gillott, which was sold online by Living Marxism/LM[2] and accepted an invitation to speak at the Leeds Salon [3].

Prometheus No. 1, edited by Manjit Kumar of the LM network

Prometheus No. 2, edited by Manjit Kumar of the LM network

Prometheus No. 3, edited by Manjit Kumar of the LM network

In Science and the Retreat from Reason (Monthly Review Press, 1997) - first published in Britain by Merlin Press (1995) - Gillott and Kumar argue that progress requires the unfettered growth of science. This it sees as threatened by the irrationality of the environmental movement.[5]

Despite being published by the Monthly Review Press, Gillott and Kumar's book attracted a review in their journal Monthly Review that contained some unusually scathing criticisms. In his review John Bellamy Foster argues that although the book advances a 'strong and in many ways brilliant defence of science and reason', in the end it 'turns, in my view, into the opposite.'[6] The book, according to Bellamy Foster, takes on 'all the assumptions' of 'the current "brownlash" against environmentalism', ie the attempt to minimize the seriousness of environmental problems in order to fuel a backlash against environmentalism and 'green' policies.[6]

Bellamy Foster is also highly critical of the authors' thesis, advanced particularly in the book's penultimate chapter, that environmentalists are 'the main contemporary enemies of science and reason'. He also notes the authors' 'naive willingness to accept all technology without question' - something which 'is evident throughout Science and the Retreat from Reason.'[6]

The authors, he says, 'write as if the left is simply being irrational in being skeptical about the wisdom of obtaining "cheap electricity from atomic power" or the application of "genetic engineering"[7] --as if these technologies did not raise quite horrific possibilities.' Gillott, by contrast, is no skeptic but a true believer, writing of 'an imperative to crack on with genetic engineering: it will help improve the human condition. Diseases will be cured, new drugs will be developed, and, in the distant future, we might want to make more fundamental changes to our genetic constitution.' [8]

Bellamy Foster continues, 'Not ones to stop half-way in their criticisms, Gillott and Kumar go on to contend that all of those who believe that there are ecological limits to economic growth (even ecological limits to capital accumulation) have succumbed to "a mass psychosis about limits in nature".[9] Such views, we are told, are anti-science and anti-reason. Yet the fact remains that they are held by many, probably most, scientists, and hence cannot simply be presented--as Gillott and Kumar are wont to do--as attacks on science from without...'

Bellamy Foster continues, 'Ultimately, it is not just environmentalists who come under attack in Gillott and Kumar's book but all of those, among scientists and philosophers, who have raised questions about the role of science in contemporary society. Thus among those who are supposed to have retreated from science and reason we find, astonishingly, such names as Robert Oppenheimer (because of his quote from the Bhagavad Gita--"I am become death, the destroyer of worlds"--when viewing the first atomic blast), Bertrand Russell and Alfred North Whitehead'.[10]

Bellamy Foster concludes his review, 'It is difficult to understand, in fact, how a book that began with such a brilliant defense of science and reason, and indeed of realism, could lead in the end to such a state of unreason.'[6]