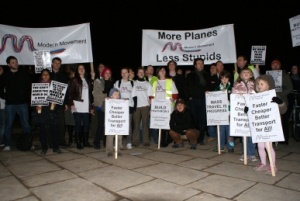 The one and only Modern Movement demo - a counter to the protests against the third Heathrow runway in February 2009. 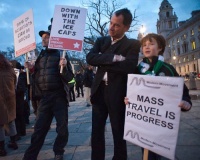 Kirk Leech at the Modern Movement demo in 2010

The Modern Movement was associated with the libertarian anti-environmental LM network. The Modern Movement was launched in early 2009 [1] in response to protests over airport expansion and shut down around three months later. [2] It supported growth in air travel at a time when there was significant opposition to a proposed third runway at Heathrow. One commentator observed "After just a cursory look around its website, it soon becomes apparent that the Modern Movement is yet another sanctuary (like Spiked, Living Marxism, Institute of Ideas, Manifesto Club etc etc) for the former members and ideological descendants of the Revolutionary Communist Party and their "the progress of mankind must never be interrupted or hindered, like, ever" views."" [3]

Plane Stupid make a mockery of the Modern Movement, LM network's 'counter demonstration' in favour of a third runway at Heathrow.

Photos of the twenty strong Modern Movement demonstration in Parliament Square on 19th February 2009, held in response to an anti-runway demonstration, are available from James Heartfield. [4] Other photos are here [5]; and here, [6] with commentary here [7].

A Modern Movement event introduced by LM stalwart Austin Williams was advertised on the Institute of Ideas website alongside other network entities. [8]

An early supporter was Nathan Coombs. [14]

Hochuli was interviewed on the subject by LM network entity WORLDbytes. Listen to the interview. [15]