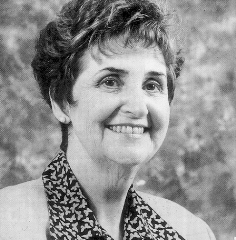 Once tipped as a future head of the MI6, Baroness Margaret "Meta" Ramsay is a former MI6 operative and advisor to the late John Smith. She is chair of the Atlantic Council of the United Kingdom[1] and a non-exec director at Nirex. Steven Dorril's history of MI6 states that Ramsay was secretary of the International Student Conference (ISC) which allegedly acted as a CIA front. Its offshoot the Fund for International Student Co-operation 'shared an office' with the Overseas Students Trust which also seems to have had intelligence connections and worked within the NUS.[6]

Ramsay followed a career of over twenty years in HM Diplomatic Service in MI6, where she was a Scandanavia specialist, and was Foreign Policy Advisor for John Smith from 1992 until his death. She was part of a Glasgow University 60s clique which included Smith, Donald Dewar, Derry Irvine the Lord Chancellor, Menzies Campbell, Angus Grossart the merchant banker, Jean McFadden the ex-leader of Glasgow City Council and Lord Gordon, founder of Radio Clyde who holidayed with Ramsay and Dewar shortly before he had his heart attack. (Sunday Times, August 15, 1999)

According to the Sunday Times:

Dorril says that politicians including Dewar, John Smith, Gordon Brown, George Foulkes, George Robertson and Robin Cook were precisely the types the intelligence services longed to see take control of the Labour party and he believes that contemporaries and acquaintances of these leading Scottish Labour figures took active roles in organisations sponsored and endorsed by MI6 and the CIA.

"Elizabeth Smith (John Smith's widow) was approached. So was Margaret "Meta" Ramsay, president of the Scottish National Union of Students between 1959 and 1961, who worked at the Fund for International Student Co-operation (FISC) where the organiser was George Foulkes. "In 1969 the Radical Student Alliance published a pamphlet alleging that FISC was a CIA front," says Dorril. "That was denied, but in 1969 Ramsay joined MI6. She was a specialist in the Scandinavian states."(Sunday Times, June 15, 2003)

An Honorary Visiting Fellow in Bradford's Department of Peace Studies, a lifelong member of the Labour Party and the Fabian Society she is also an executive member of the Labour Finance and Industry Group[3] which connected Demos to those representing Big Business and right-wing think tanks. Ramsay is also involved with the Labour Movement for Europe and the women's equality lobby Emily's List - which she helped to found - and the 300 Group[4] She is a Trustee of The Smith Institute, a member of the Advisory council of the John Smith Memorial Trust a former consultant to Control Risks Group, and chair of the advisory board of the Centre for Scottish Public Policy. [5]

With her place on the Intelligence and Security Committee, Ramsay is also closely involved in Parliamentary oversight of SIS, GCHQ and the Security Service. Established in 1994, the Committee "operates within the 'ring of secrecy' and has wide access to the range of Agency activities and to highly classified information". [7]

Ramsay's involvement with the Foreign Policy Centre are an indication of an, if not out-sourced, certainly a close relationship to some of the Foreign Office and MI6's activities, overseen by Ramsay. For instance in the field of 'Public Diplomacy', Mark Leonard and Vidhya Alakeson's FPC study Going Public: Diplomacy for the Information Society outlined techniques which governments could use to influence public opinion in other countries. "It has had a tangible influence: the Foreign Office launched a public diplomacy department shortly after the report was launched, and its influence could be seen in the British Council's five-year plan. The Swedish Foreign Ministry declared it 'the most ambitious study of the future of diplomacy'. [8]