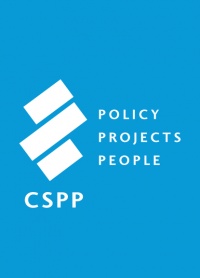 An independent think tank providing a focus for imaginative and innovative policy debate on the key issues facing Scotland.[1]

The CSPP says its aim is the "promotion of an imaginative policy debate" by "organising opportunities for politicians, policy thinkers and practitioners to meet and to learn from each other."[2]The website adds that the CSPP was formerly known as the John Wheatley Centre.[3] As of 2009 the CSPP's chief executive is Ross Martin (appointed 2004), a former Labour Councillor and failed Labour candidate for a seat in the Scottish Parliament in 1999.[4] He followed Gerry Hassan, who was previously head of communications at the Scottish Council for Development and Industry (SCDI) lobby group[5]. As of 2009 Hassan is working with think-tank Demos on the Scotland 2020 project[6].

Prior to his new position at the CSPP, Martin was head of the Scottish Forum for Modern Government at Aberdeen's Robert Gordon University. This institute, set up in November 1999, has effectively ceased to exist. According to an article in the Edinburgh Evening News, Martin wants the CSPP "to act as a bridgehead between the government and the people they seek to govern by providing opportunities for engagement, by challenging vested interests".[7] In an interview with Hartwig Pautz, Martin said that he wants the institute to be seen as "centre-left", although not aligned to a political party.[8]

The CSPP is pursuing research into public service reform in Scotland[9]. According to an interview of Martin by Hartwig Pautz, it has received sponsorship among others by BAA Scotland, the European Parliament and the German Social Democratic Party’s Friedrich-Ebert-Foundation.[10]

The CSPP used to be called the John Wheatley Centre. It was named after the respected Independent Labour Party MP, who passed legislation enabling government action on Glasgow's Housing Problem, a major cause of misery in the city at the time.

The Centre says it is "independent of political parties" and that its programmes "involve a wide range of experts drawn from across the Scottish body politic"[11].

From the Internet Archive of the CSPP site.[17] Ross Martin Chief Executive