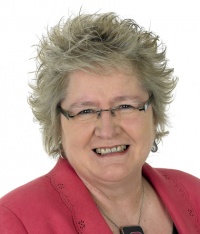 McGuire lost her seat in the 2015 general election to the Scottish National Party's Steven Paterson by 10,480 votes.[2]

As a longstanding Labour Party member McGuire carried out a number of different roles in Parliament. Firstly serving as the parliamentary private secretary to Donald Dewar, the then secretary of state for Scotland from November 1997 to July 1998. Following on from this, she took on the role of assistant government whip and was then appointed a lord commisioner to the Treasury in June 2001. [3]

In June 2002 McGuire went on to became parliamentary under secretary of state at the Scotland office. From 2005 until October 2008 she was minister for disabled people at the Department for Work and Pensions. [3] McGuire also served as the parliamentary private secretary to Ed Miliband from October 2010 to October 2011. [3]

In the 2015 New year's Honours List Anne was appointed DBE (Dame Commander of the Order of the British Empire) for political and parliamentary services.