The Scottish Parliament Business Exchange is promoted as an educational exchange allowing members of the Scottish parliament to learn more about all kinds of business. All corporate participants are required to sign a letter affirming they will not use the scheme for lobbying. In practice the exchange is dominated by TNCs who pay up to £7,500 to join and three quarters of those taking part in it s first round of activities were full time lobbyists. It is the Scottish 'chapter' of the International Association of Business and Parliament, a company based in London.

In January 2007 it was announced that Devin Scobie had been appointed as the interim executive director of the Scottish Parliament Business Exchange. At that point he was described as Devin Scobie of Caledonia Consulting.[1] Scobie is a former lobbyist with GPC International and has represented SPBE members such as Pfizer as clients.

Members sign up to, and programmes are planned and delivered, under certain key principles

Policies safeguarding these principles include:

The participating corporate lobbyists are extremely positive about the SPBE. 'An invaluable insight' says The Saltire lobbyist; 'fascinating and valuable' echoes the man from BP. Nuclear firm British Energy, which has just received a ?650 million subsidy, courtesy of the taxpayer, says on its website that the Exchange 'provides great opportunities for Scottish business'. Indeed. However, it is only supposed to allow MSPs to educate themselves about business, rather than provide 'value' and 'opportunities' to big business. [3]

This organisation has institutionalised corporate links with the Scottish parliament. There are 44 MSPs in contact: 25 involved in programmes, 6 at planning stage and 8 showing general interest. Apparently they see no conflict of interest with this contact. The nature of the specific programmes are not recorded on the SPBE website [4]

After marvelling at the incredible contortions of MSP defenders of this scheme, we should direct our attention to its progenitors. The SPBE was set-up by the Chief Executive of the Scottish Parliament Paul Grice and the presiding officer David Steel. They have not seen fit to defend the Exchange in the media, but it is their stewardship of the project which raises the most serious questions. Margaret Jamieson may have been naive, but she assumed that the Exchange had cleared confidentiality agreements. They hadn't, because, as Paul Grice put it at the unofficial launch in June 2001, "a strong guiding principle... is that we should set the Exchange up with a minimum of rules and regulations". This failure to police the conduct of the corporations involved has led predictably to the current fiasco. David Steel too has been unusually silent. He was more expansive at the unofficial launch. In an agreeably chummy get together he described to the assembled MSPs and corporate lobbyists his ambition for the Exchange "to go deeper than just a few days of junketing - no, that's not the right word (laughter from audience) - the few days of mutually beneficial contact". Steel also noted that the Exchange had "broadened out beyond just business and industry and into all community organisations of every kind". This has turned out to be false. Five of the eight participants are from multinational corporations and one is a commercial lobbyist representing multinationals; the other two represent enterprise quangos.

Defending the Exchange before the Standards committee recently Grice rejected criticism of his pet project. He claimed that the undertaking by participants not to lobby is a sufficient safeguard, despite any clear definition of what lobbying might entail. In fact, Grice is on record recommending the lack of rules and regulations as a positive feature of the Exchange. As lobbying is the full time function of the Exchange's corporate members it is rather like suggesting that a fox can shadow the chicken house so long as it acts like a mouse. Grice's defence required him to dissemble in the worst traditions of Sir Humphrey and the British civil service. In the Grice lexicon words can apparently be stretched to mean the opposite of their dictionary definition. The Exchange does not allow privileged access to big business because "The rules of the Exchange give the members safeguards so that they can have a constructive exchange. There is no privileged access in any sense of the word" (my emphasis). But the fact is that the scheme is dominated by multinationals and that there is no comparable access to MSPs (up to 26 days a year or a day a fortnight) for any other interests. The Oxford English Dictionary lists the following synonyms for privileged: favoured, advantaged, indulged, special. Readers can judge for themselves which of these senses apply to the scheme.

On the question of openness Grice noted that "The MSPs knew exactly whom they were dealing with. We put a press notice out saying who the people were. In no sense was anything hidden. That openness is another safeguard" (my emphasis). A press notice there certainly was, but it noted only that Fiona Burns was a 'policy adviser' at Shepherd & Wedderburn the law firm. Actually, she works for Saltire Public Affairs, its lobbying subsidiary. Such lack of transparency is par for the course in the world of lobbying, but it is worrying that the Chief Executive feels the need to endorse the lobbyists slippery use of language. Moreover the MSP involved in the exchange, Elaine Thomson, who also sits on the board of the SPBE, appeared to be slightly less than 'exactly' aware of who she was dealing with. Here is what she said to BBC Newsnight:

Elaine Thomson MSP: One of the things that was done when the inward Parliament programme was organised was that all the names, positions and companies of those involved were all published and was quite open.

Gordon Brewer (Newsnight): So you were aware that this woman was not a lawyer, but in fact worked for a division of Shepherd and Wedderburn, which from what it says about itself looks very much like a lobbying company?

ET: It's a company that deals in information and it is the public affairs arm of that company. I mean the individual in question is professionally, as I understand it, a solicitor, though she is currently employed in the public...

GB: We asked the company today and they said she has no legal training.

ET: Right... I thought she was professionally qualified but obviously I should have read her CV a little more effectively. (7 October 2002)[5]

Screengrab from SPBE website 21 May 2008 showing the claim that Grahame Smith was a director. He never was.[7]

The Presiding Officer of the Parliament is the Honorary President. 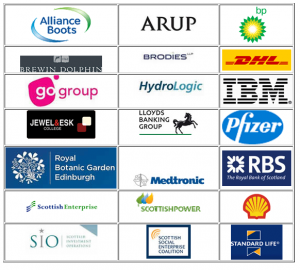