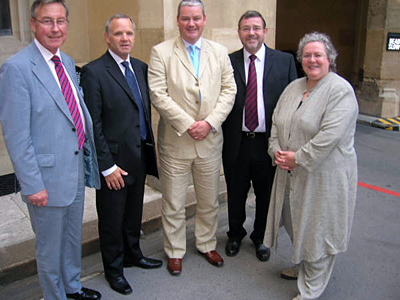 Caledonia Consulting is a lobbying firm in Edinburgh which is run by long time lobbyist Devin Scobie.

It employs two former Liberal Democrats MSPs (as of August 2015).

Caledonia's Devin Scobie used to work for the controversial lobby firm GPC International (involved in the Derek Draper affair). At the same time, Scobie was simultaneously (until January 2008) the director of the Scottish Parliament Business Exchange a venture set up in the Scottish Parliament with the stated purpose of educating MSPs and business about each other. The body states that it is 'non-lobbying' and yet many of those associated with it, including Scobie, were/are professional lobbyists.[1]

This apparent conflict in the operations of the Exchange led to an inquiry into its activities by the Standards Committee of the Scottish Parliament.[2]

Also at Caledonia at the time was another member of the SPBE, Lynda Gauld a former lobbyist for Pfizer.[3]

The controversy was compounded by the fact that Caledonia also hired two former MSPs. One David Davidson of the conservative Party was also connected with the SPBE while elected as an MSP. The other Mike Watson is the disgraced former Labour minister imprisoned for 'fire raising' after he set alight the curtains at an Edinburgh hotel during a Scottish political awards event.[4]

In 2009 The Herald reported that Diageo had hired Caledonia Consulting as part of their campaign against stricter alcohol regulation proposed by the SNP Scottish Government.[5]

At the time, House of Lords cross-bencher, Baron Watson of Invergowrie, Mike Watson, was an associate director of Caledonia Consulting.

Mike Watson served a 16 month prison sentence for setting fire to a hotel after the Scottish Politician of the Year Event in 2004. The event is sponsored by Diageo and The Herald. Watson pleaded guilty to wilful fire raising, the Scottish legal establishment's term for arson, but claimed he had experienced an alcohol related 'blackout' [6]

Evelyn Gillan, then director of Scottish Health Action on Alcohol Problems (SHAAP), now chief executive of Alcohol Focus Scotland said: "It is ironic that someone who has been in prison for an alcohol-fuelled crime is working for a firm helping Diageo put a stop to innovative policies. Diageo is only interested in maintaining profits, and Caledonia Consulting are helping them do this." [7]

The consultancy had clients from the scotch whisky industry. Both Devin Scobie and Andrew Scobie (no relation) also sat on the Cross-Party Group in the Scottish Parliament on Scotch Whisky.[8]

Caledonia does not declare its clients on its website, nor is it signed up to the voluntary transparency registers operated by the lobbying industry.

However, Devin Scobie is registered on the CIPR's voluntary register. As of August 2015, he lists his clients as:[12]