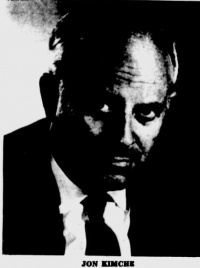 Kimche was born in St Gall, Switzerland. His father, a fervent Zionist, later brought the family to London.[2]

His father was a liberal Zionist who had been the youngest member present at Theodor Herzl's first Zionist Congress held at Basle in 1897.[1]

During the 1930s, he worked in a Hampstead bookshop with George Orwell.[2] From there he moved to the Independent Labour Party bookshop off Fleet Street.[1]

According to the Guardian's obituary, "Kimche used his Swiss passport during the second world war to travel throughout Europe on mysterious assignments for Britain and the Zionist movement."[2]

Kimche was recruited as a writer for the Observer by David Astor.[3] He became the military correspondent, a role he also served for Reuters and the Evening Standard.[2] He covered Spain, Austria and the Middle East.[1]

He served as Deputy Editor of Tribune from 1942 to 1944, running the paper under the nominal editorship of Aneurin Bevan.[1] where he appointed George Orwell as literary editor and columnist.[2]

He spent the final year of the war with Reuters.[1]

At the beginning of 1946, Michael Foot recruited Kimche as editor of Tribune.[1]

Kimche lost the job after disappearing from the office in December 1946, when he was called upon by the Zionist underground to negotiate the release of a ship full of holocaust survivors travelling to Palestine from Turkish waters.[2][1]

In a letter of 10 January 1947, to the DSO Palestine, MI5 head Sir Percy Sillitoe reported on the activities of Teddy Kollek in London, stating "One of his closest contacts is John Kimche."[4]

He wrote the book Seven Fallen Pillars (1950) on British policy in Palestine. Together with his brother David, he wrote The Secret Roads (1956), on illegal immigration to Palestine and Both Sides Of The Hill (1960), on Israeli and Arab attitudes in the 1948 war and after.[2][1]

In the early 1950s, he again worked for Reuters, visiting capitals across the Arab world.[1] 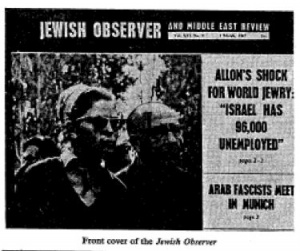 Cover of the controversial edition of the Jewish Observer and Middle East Review which led to Jon Kimche being sacked as editor by the Zionist Federation in March 1967. [5]

From 1952 to 1967, he was editor of the Jewish Observer and Middle East Review, the official publication of the Zionist Federation.[2]

In February 1967, criticised the Israeli government over the Bul magazine affair:

Earlier this month it became known that both the New York Times and Time magazine had sent reporters to Israel to investigate the case, and on Sunday morning the New York Times published the results of its inquiries on its front page. It gave an account of the arrest of the two editors, and quoted a fairly obscure French periodical, which had reported that the trouble had arisen over a conflict between the Prime Minister and the chief of Israel's intelligence over matters arising from the Ben Barka affair. The Israel government spokesman thereupon categorically denied there had been any Israeli involvement in the abduction of the Moroccan Socialist leader.[6]

In March 1967, Kimche's publishers, the board of directors of the Zionist Review dismissed him after a dispute in which he accused their major stockholder, the Zionist Federation of Britain of censorship of material in the magazine. The Zionist Federation is the principal stockholder in the Zionist Review, publisher of the Observer. In an open letter to Kimche, The board denied that the dispute was prompted by an intervention some days earlier by Israel's Prime Minister Levi Eshkol, who had objected to an article criticising Israel's Minister of Justice Yaacov Shapiro. The board charged Kimche with ignoring instructions from the editorial committee not to print an article on unemployment in Israel, which the committee considered misleading.[7]

The Israeli government also denied any role in the dismissal, according to the Jewish Telegraphic Agency, which stated:

The Foreign Ministry's spokesman said the only action taken by the Government was a protest by Israel's envoy to London, Ambassador Aharin Remez, against the Observer's call for the resignation of Minister of Justice Yaacov Shapiro, and the periodical's criticism of the Israeli Judiciary as a result of the secret arrest, trial and sentencing to one-year prison terms of two editors of Bul magazine.[8]

During a vote of no confidence in his government, Prime Minister Eshkol .charged that the publication had printed material influenced by a member of Rafi "with whom Kimche is friendly"', the Jewish Telegraph Agency reported.

He was believed to have referred to Shimon Peres, the former deputy defense minister who is one of the Rafi leaders.
Mr. Eshkol said that an article by Mr. Kimche not only asked for the resignation of Minister of Justice Yaacov Shapiro, but "cast suspicion on the integrity of the entire administration of justice in Israel."[9]

His close ties with the leaders of the new Jewish state, including Israel's first prime minister, David Ben-Gurion, helped him secure Israeli government funding for a magazine on Middle Eastern affairs which he began to publish in London in the late 1950s. The magazine folded in 1965 after Israeli financial support was withdrawn.[10]

According to Hadar, the real reason for the withdrawal was the split in Mapai in the wake of the Lavon Affair:

Jon Kimche sided with Ben-Gurion. As a result, Kimche incurred the wrath of the Old Man's more moderate political rivals who, under the leadership of Prime Minister Levi Eshkol, took control of the party and the government in the mid 1960s.

What directly triggered the decision to stop the funding for the magazine, however, was an editorial written by Kimche which accused Eshkol of ordering the Mossad to assassinate the Moroccan opposition leader, Mehdi Ben Barka, in 1965. (Eshkol argued that it was Mossad chief Meir Amit, Ben-Gurion's ally, who gave the order without consulting Eshkol, even though he was prime minister at the time.)[10]

After leaving the Jewish Observer Kimche became the 'Middle East expert' of the London Evening Standard and 'a frequent contributor to the Illustrated London News, the BBC and the television services'.[11] During the 'Six Day War' Kimche also broadcast for the Canadian Broadcasting Corporation.[11] In September 1967 Kimche was appointed to write 'an exclusive weekly report on... the Middle East' for the Canadian Jewish Chronicle Review.[11]

The Six Day War, and the subsequent War of Attrition led to new writing opportunities with the Evening Standard. In 1968, Zionist backers including Marcus Sieff and George Weidenfeld set him up as editor of the New Middle East but this role ended in 1971, when he clashed with his editorial board over contributions from three leading members of the Council for the Advancement of Arab-British Understanding.[2][1]

In 1973, shortly before the outbreak of the Yom Kippur War, Kimche reported in the London Evening Standard that the Egyptians had moved their Soviet SAM missiles umbrella on the Suez front in defiance of the American-brokered agreement. This prompted some to wonder if he had received a tip-off from Mossad where his brother David Kimche was a senior officer.[2] He was nevertheless dropped by the Standard at around this time because his reports of secret meetings were regarded as increasingly dubious. He was criticised for not citing sources, while he was in turn critical of academics who relied too much on official documentary records.[1]

His last editorship was at a newsletter initially entitled Afro-Asian Affairs and subsequently Arab-Asian Affairs which ran for four years from 1975.[2]

In 1978, he forecast the success of the Camp David talks, when others were predicting their failure.[1]