From Powerbase
(Redirected from MI5)
Jump to: navigation, search 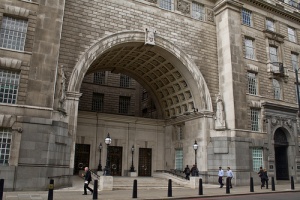 During World War Two, MI5's Double Cross system effectively subverted espionage in Britain. In 2014 it emerged that MI5 had also gained effective control of a network of domestic Nazi sympathisers.[1]

In September 1971, MI5's Operation FOOT led to the mass expulsion of Soviet diplomats from London. The event would prove to be the high-point of the service's cold war counter-espionage role.[2]

Counter-Subversion and the "far and wide" left

Peter Wright describes a meeting of senior A Branch and MI5 F Branch officers to discuss the "far and wide left" early in Michael Hanley's tenure as head of MI5:

The Prime Minister and Home Secretary had left him in no doubt that they wanted a major increase in effort on this target. He then handed over to a young and ambitious F Branch officer, David Ransome, who outlined the activities and structure of a host of left-wing splinter groups , like the Workers Revolutionary Party (WRP) and the Socialist Workers' Party (SWP).[3]

There have been a number of allegations that MI5 officers plotted against Prime Minister Harold Wilson during his second term of office in the mid-1970s.[4]

The Mail on Sunday reported in April 2010 that MI5 bugged Downing Street under five Prime Ministers between 1963 and 1977. The bugs were initally ordered by Prime Minister Harold Macmillan. After a brief gap they were reinstated by his successor, Alec Douglas-Home. It is not clear whether Edward Heath and Harold Wilson were told of the surveillance. Historian Stephen Dorril suggests this revelation appears to justify Wilson's belief that he was being spied on.[5]

The surveillance was ended on the orders of Prime Minister James Callaghan in 1977. Callaghan nevertheless denied in the Commons that No. 10 had ever been bugged.[6]

Details of the bugging were due to appear in Professor Christopher Andrew's 2009 official history of MI5, The Defence Of The Realm, but were removed at the insistence of the Cabinet Office.[7]

Once a new Government has been formed MI5 briefs the incoming Prime Minister on any Ministerial appointments it thinks may be of concern to 'national security'. MI5's director general, Sir Stephen Lander told Radio 4: "In 1997 therefore the way the then cabinet secretary and I agreed we would deal with it... was that I would produce the summaries, one sheet for each of the individuals that we thought we should make a comment on... and if the prime minister said I'm thinking of making X secretary of state for defence, they [the cabinet secretary and the prime minister's principal private secretary] would say 'well prime minister, you might like to read this from the security service'." [8]

In February 2010, the Security Service was sharply criticised in a draft judgement by the Master of the Rolls (head of the Court of Appeal) Lord Neuberger over its role in the case of Guantanamo detainee Binyam Mohamed:

as the evidence in this case showed, at least some SyS officials appear to have a dubious record when it comes to human rights and coercive techniques, and indeed when it comes to frankness about the UK’s involvement with the mistreatment of Mr Mohammed by US officials. I have in mind in particular witness B, but it appears likely that there were others.[9]

The Mail reported in April 2014 that an MI5 unit had been set up to monitor corruption in the Metropolitan Police, following the murders of Daniel Morgan and Stephen Lawrence.[10]

MI5 structure according to its official website
© Crown Copyright 2009

According to the MI5 website, the Director General, Deputy Director General and Legal Advisor make up the Management Board of the Service, along with seven branch Directors. The board is supplemented by two Non-Executive Directors from outside the Service in an advisory role.[12]

There are some differences between the two accounts. According to the website, international counter-terrorism and counter-espionage are the the responsibility of a single branch, suggesting that Hollingsworth and Fielding's D and G branches may have been merged or re-organised. The website also lists a separate Information Services and Technology Capability branch, suggesting that information technology may have been separated from H Branch.