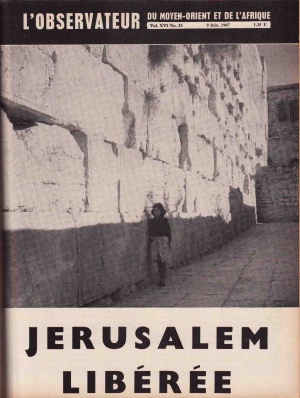 The cover of the French edition of the Jewish Observer, L'Observateur du Moyen Orient et de L'Afrique after the occupation of East Jerusalem by Israeli forces in the Six Day War, 9 june 1967, Vol XVI No. 23.

According to Emanuel Litvinoff who became Assistant Editor at the Observer in the mid 1950s:

I found myself a job on a journal called The Jewish Observer and Middle East Review. In fact I was one of the founders of it because there had been a previous weekly called The Zionist Review, they had taken on rather a good journalist as the editor. ...Jon Kimche, who... had a pretty good reputation as a war correspondent actually and a war expert, a military expert for I think The Observer and The Evening Standard and he had plans to turn this funny little magazine The Zionist Review into something more substantial so I was in at the planning stage and I became the Assistant Editor.[2]

It was former editor Maurice Samuelson who announced the closure of the journal at the end of 1977.

The Jewish Observer and Middle East Review, the world's oldest Zionist weekly paper, closed down this week because of lack of funds. The organ of the Zionist Federation of Great Britain first appeared more than 60 years ago under the title Zionist Review. It was given its present name in 1952. The demise of the paper followed the withdrawal of a direct subsidy by the Jewish Agency in Jerusalem, which had kept it in business for the past three years. Previously, it had been largely financed by a block subscription by the Joint Israel Appeal. The ending of the block subscription caused the circulation to be cut from more than 12,000 copies a week to about 4000.

Some of the outstanding figures in Zionism had been associated with the Review. The paper opened in May 1917 on the instigation of Dr. Chaim Weizmann, then president of the British Zionist Federation. Sir Leon Simon, a close friend of Weizmann, was the first editor. Later editors included Paul Goodman, the Rev. Maurice Perlzweig, Moshe Pearlman and Dr. S. Levenberg. In announcing the closing of the paper, the Zionist Federation said they hope to bring out a monthly magazine in the middle of 1978, concentrating on ideological articles rather than news analysis.[3]

Under the editorship of Kimche the Observer was not always ideologically unbending. It employed Emanuel Litvinoff, the former Communist - who 'was not a Zionist'[4] - whose final published novel, Falls the Shadow (1983), included an Israeli citizen who is revealed as a former concentration camp guard. '"Litvinoff knew his book would be found provocative," says Wright, "but he wrote it because he was worried by the way Israel was invoking the memory of the Holocaust to justify outrages of its own."'[5] Paul Kohn worked as a writer for the Observer and in later life was said to 'maintain he's an unrepentant non-Zionist and stays [in Israel] because of the weather.'[6]

According to Joseph Finklestone in an obituary for the Guardian:

It was as editor of the Jewish Observer and Middle East Review from 1952 to 1967 that Kimche displayed all his passion for Zionism, his incisive writing, his independence, his insistence that all sides of the Arab-Israel problem must be fearlessly discussed - and his propensity to shock. So worried was the Zionist Federation, which published the journal, that an official was assigned to read all the proofs before publication. Kimche managed to avoid his censor, to the consternation of the ZF leaders. However, they learned of his intention to print an article claiming that unemployment in Israel was twice as high as had been officially disclosed and emigration was on the rise. Kimche refused to withdraw the article, the ZF refused to print the magazine containing it - and Kimche was sacked. Kimche had been accused of interfering in Israel's internal affairs - but it was the direct intervention of the Israeli prime minister that led to Kimche's dismissal. This revealed what a vital journal the Observer had become for anyone interested in the Middle East.[7]

Assistant editors and other staff

In common with the JC, it devoted a great number of column inches to the issue of Palestinian propaganda on UK campuses. Apart from news stories in both publications reporting the avalanche of Arab propaganda on campus, and a small, heroic number of individual voices calling for the Jewish community to do more to help students combat it, the Jewish establishment failed to step up — with human resources, educational support, PR or advertising campaigns or cash — to counter the Palestinian narrative being imparted to students across British universities.[15]