Charles Powell, Lord Powell of Bayswater KCMG is a member of the House of Lords and a former UK diplomat. 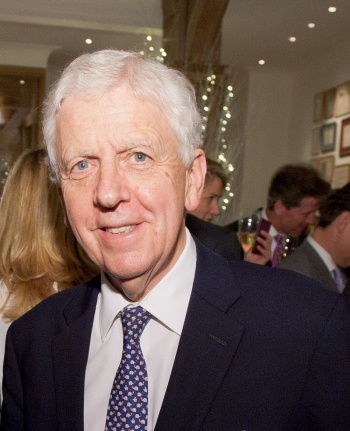 Powell was Private Secretary to Margaret Thatcher (1983-90) and John Major (1990-91). [1] According to Gavin Esler, Powell was the key link between the UK and US, in daily telephone contact with his counterparts in Washington.[2]

Powell is a cross-bench member of the House of Lords, where he serves on the Economic Affairs Committee. He is Chairman of the All-Party Parliamentary Group on Entrepreneurship.

Powell has three brothers, Chris (a senior figure in Boase Massimi Pollitt and contributor to Labour's advertising campaign in 1987), Roderick and Jonathan Powell, a member of the Labour Party who became the Chief of Staff to Tony Blair's privately-funded office. His wife, Carla Bonardi, who he married in 1964, is thought of as highly extrovert. The Independent felt compelled to add the following disclaimer to an article concerning Ms Bonardi in 1999: 'DO NOT USE this material at all - seek legal advice if writing about her.' [3]

"At the outset, the inquiry accepted that the Prime Minister knew everything about everything. In general, it was good to cultivate that view, but not in this case." [4]

Ole Hansen noted that 'During her last six years as Prime Minister, [Powell] had become her most trusted adviser and, perhaps, the second most powerful person in No 10. He controlled her foreign policy in-tray and, by her own evidence, decided what she needed to be told. [5] 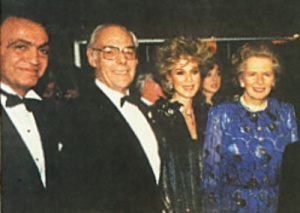 "Sir Charles Powell, a long-time foreign policy advisor of Thatcher who was present during the negotiations for this deal, was later hired as chairman of Sagitta Asset Management Limited, of which [Wafic] Said is the primary shareholder." [6]

"I am indeed a friend of Mr Said's, and am proud to be so: he is a remarkable man and an extraordinary benefactor of good causes in this country. But I conduct no business on his behalf in Syria or elsewhere in the Middle East. Nor do I have any connection with First Saudi Investment Company to which Mr Glover refers." [7]

"The two men first met in the late 1980s when Lord Powell was the prime minister's private secretary and Mr Said was involved in the 20 billion Al Yamamah arms contract between Britain and Saudi Arabia. In 1994, having left the Foreign Office, Lord Powell became a director of Said Holdings. In 1996 Mr Said made him a trustee (unpaid) of the Oxford Business School which he had just endowed. In February of this year Lord Powell became chairman of Sagitta Asset Management Ltd, which is Mr Said's main investment vehicle. Sagitta, and the companies with similar names clustered around it (e.g. Sagitta Investment Advisers Ltd), would repay hours of study. Last year Sagitta Asset Management made a loss of 1,238,395 on a turnover of 2,524,097 and paid its highest-paid director 910,000. All the Sagitta companies are subsidiaries of Sagitta International Limited, registered in Bermuda and controlled by Wafic Said." [8]

"Since 2003 he has been a political adviser to BAE's chairman, firstly Dick Evans and then Dick Oliver. In 2005 it was revealed that Tony Blair was employing him as his special envoy to Brunei, at the same time as BAE was embroiled in a dispute with the south-east Asian state over the purchase of three warships. Powell denied a conflict of interests." [9]

Michael White, writing in The Guardian in 2001, stated that as well as the vice-chancellor of Oxford and three senior academic colleagues, the trustees of the business school include five appointed by Mr Said, subject only to the vice-chancellor's approval. They are Lord Alexander of Weedon (chairman of the NatWest Group of companies), Robert Genillard (a Swiss financier and industrialist), Professor William Pounds (formerly Dean of the Sloan School of Management, MIT) Ms Catherine Roe (Director of the Karim Rida Said Foundation which commemorates Mr Said's late son) and Lord Powell. [10]

In a Wall Street Journal investigation into outside interests held by members of the House of Lords, Powell said the Lords' conduct code prohibits him from lobbying, but does not preclude 'communicating concerns' that his companies might have to government officials, and that he wouldn’t lobby government for any of his employers.[11]

Powell's disclosure on the Lord's register of interests shows him as an adviser to BAE in 2015, alongside his role as a member of the Thales UK advisory board and chairman of Rolls Royce international advisory board. [12]

It revealed that Lord Powell was paid £178,175 over seven months from the London-based account, which was also used to funnel more than £100m into an offshore slush fund set up to make corrupt payments to middlemen and officials around the world. *[13]

Powell has been a director of the US-based firm Textron Inc since 2001 when he was appointed the 'lead director and chairman of Organisation & Compensation Committee (2001-).