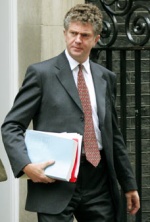 Jonathan Nicholas Powell (born 14 August 1956) served as Chief of Staff to Tony Blair from 1995 to 2007. He was also the Chief British Negotiator on Northern Ireland in the decade up to 2007.

Powell is the brother of former UK prime minister Margaret Thatcher's favourite PR man Charles Powell. He was one of the driving forces behind the decision that one of the quickest ways to show that the Labour Party was pro-business was to take funding from business.

Born in 1956, he is the son of an Air Vice-Marshal, he comes from an influential family. He is the brother of Thatcher's favourite PR man Charles Powell. Another of his brothers, Chris Powell was Managing Director of BMP DDB Needham, the Labour Party's advertising agency for the 1997 election. [1]

He worked for the BBC and Granada Television before becoming a career diplomat. He was recruited by Tony Blair from the Washington Embassy where he was First Secretary, in 1995. He went to Oxford and Pennsylvania Universities. He was one of the driving forces behind the decision that one of the quickest ways to show that the Labour Party was pro-business was to take funding from business.

He is married to Sarah Helm, a former journalist in Brussels. They made the headlines in May 2000 when they handed their 8-week-old daughter to a cloakroom attendant while they dined at the Groucho Club. [2]

He was recruited by Tony Blair from the Washington Embassy where he was First Secretary, in 1995. He went to Oxford and Pennsylvania Universities. [3] He was one of the driving forces behind the decision that one of the quickest ways to show that the Labour Party was pro-business was to take funding from business.

Jonathan Powell's role in Downing Street came under intense scrutiny during the Hutton Inquiry. The Hutton Inquiry was set up following the death of David Kelly in 2003. On August 18 2003, Powell gave evidence to the inquiry. He was questioned about the decisions made in Downing Street on how to deal with David Kelly. An email sent by Powell to John Scarlett in September 2002 seemed to suggest that the dossier on the threat posed by Iraq should be toughened up. [4]

Powell wrote Blair's only speech on foreign policy during the 1997 Election Campaign. The speech complained that the Conservative Government was guilty of 'presiding over the largest reduction in our military capacity since the war', and declared Blair's 'vision' for a 'Britain confident of its place in the world, sure of itself, able to negotiate wiht the world and provide leadership in the world.' Powell had also including a line in the speech declaring that Blair was 'proud of the British Empire', but the line was removed from the speech at the very last minute. [5]

He has been Blair's representative at the Irish 'Peace Talks' and during the Balkan war he acted as liaison with the Defence Chief, General Sir Charles Guthrie.

In 2009 Powell was lobbying on behalf of Gabriel Resources, a New York-based company which wants to mine gold in Romania [7]. Romanian politician Adrian Nastase has commented:

Regarding the claim that the Rosia Montana mining development will save Romania from poverty, this is but a fairy tale. They will take the gold and leave the cyanide.[8]

Since leaving government, Powell has held a number of roles and consultancies in the finance, lobbying and conflict resolution fields.

He was appointed managing director at Morgan Stanley in January 2008. This was approved by ACOBA 'subject to the condition that, for 12 months from his last day of service, he should not become personally involved in lobbying UK Government Ministers or officials on behalf of the bank or their clients'.[9]

Powell was also given 'unconditional approval' by ACOBA to become:

Powell is the founder and former director of the Centre for Humanitarian Dialogue, and was also given unconditional approval by ACOBA for this role.[9]

He is also CEO of Inter Mediate an NGO working on conflict resolution.[12] In 2012, on behalf of Inter Mediate, Powell worked with the Bahraini government teaching them negotiation and conflict resolution techniques.[13] In September 2013, he was appointed to the Save the Children International board.[14] He is also a member of the LSE IDEAS Advisory Board[10] and on the advisory board of United Against Nuclear Iran, a "group that seeks to prevent Iran from fulfilling its ambition to obtain nuclear weapons".[15]

Since leaving government, he has written a number of books on the topic of peace and negotiations. In 2009 he wrote, Great Hatred, Little Room: Making Peace in Northern Ireland, an eyewitness account of the events in Northern Ireland as peace was approached, in 2011 he wrote, The New Machiavelli: How to Wield Power in the Modern World, an insider account of life inside 10 Downing Street and in 2014 he wrote, Talking to Terrorists: How to End Armed Conflicts.[16]