From Powerbase
(Redirected from Diligence, Inc.)
Jump to: navigation, search

Diligence is a corporate intelligence and risk management company founded in 2000 by former members of the U.K. and U.S. intelligence services. It advises on corporate investments in foreign markets, as well as protecting corporations from legal investigations, what it calls “reputational threats”. The company has offices in Washington, New York, London, Brussels, Berlin and Moscow.

Diligence's website states that it was founded in 2000 “by former members of the CIA and its British counterpart, MI5.” [1] The company’s head office is at 1776 Eye Street, near Pennsylvania Avenue, Washington D.C., in the 'Golden Triangle' section of the District — four blocks from the White House. It is one of a growing number of organisations which sprang up to exploit the demand for private security in the wake of 9/11 and the wars in Iraq and Afghanistan.

In 2003 Diligence opened an office in Baghdad to provide security services and is now targeting Latin America.

The company’s website includes a selection of case studies. They are entirely unsourced and almost impossible to verify, but include elements of penetration and subversion of protest groups, as well as anti-union activities:

Diligence was retained by a prominent European scientific research group to provide early warning of a possible attack by a violent activist organization that had accused the institution of testing products on animals and that had also begun to harass managers of the institution. Our research indicated that there was friction within the activist group. The less extreme element believed that the group's violent actions not only alienated the public, but that violence would result in the facility being closed and testing moved to Eastern Europe, where research on animals would be under much less regulation and oversight. Diligence's staff played on these concerns, and managed to provide warning of any planned attacks. Information was passed to the police, arrests were made and senior managers at the facility were protected from assault. [3]

A large multinational was having labor problems at a manufacturing plant in India. There had been increasing unrest among its employees and more frequently, impromptu strikes were being called for no apparent reason. Furthermore, senior management at the plant had started to receive personal threats [...] Diligence was called in to help management better understand what was going on, to determine who was responsible and to provide early warning of the agitators' intentions. Former intelligence officers on the Diligence staff started to develop a network of sources within the work force. They quickly determined that the strike instigators were local organized criminals who were trying to take over the union in an attempt to extort money from the workers and to benefit from theft at the plant. They had hoped that by organizing strikes and making threats they would have the current union officials dismissed. Diligence worked with the plant managers, union officials, and local media sources to expose the perpetrators by publicizing their plans in a local newspaper. [4]

A Western oil "major" was ready to embark on the acquisition of a large Russian oil company. The head of the company's mergers and acquisition group asked Diligence to determine the beneficial ownership of several offshore entities belonging to the potential Russian acquisition target.

Diligence launched a discreet process of identifying and isolating the company's offshore holdings to identify any misrepresentations or non-disclosure of material facts and embarked on an in-depth investigation of the backgrounds of the target company's management and key employees. Diligence's information enabled the client to identify and isolate areas of risk and cleared key personnel of having any links to criminal activities such as money laundering, tax evasion, or corporate fraud. The client successfully completed a $7 billion investment. [5]

Diligence’s partners in Diligence Middle East include the Kuwaiti-based Al-Mal Investment Company and the Washington D.C.-based New Bridge Strategies, which provide DME with significant business development and networking skills because of their connections to the US government. New Bridge Strategies, is headed by Joe M. Allbaugh, Bush's campaign manager in 2000 and the director of the Federal Emergency Management Agency until March. 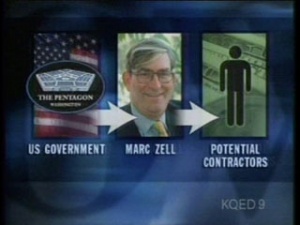 Still from the programme

Other directors include Edward M. Rogers Jr., vice chairman, and Lanny Griffith, lobbyists who were assistants to the first President George (H.) Bush and now have close ties to the White House. Allbaugh also served as George W. Bush’s national campaign manager for the 2000 election and as the campaign manager for Bush’s first run for Texas governor in 1994. He also served as Governor George W. Bush’s Chief of Staff. Along with Bush’s longtime aides, Karen Hughes and Karl Rove, Allbaugh is known as one of the three members of Bush’s so-called “iron triangle". [6]

The network of influence has been the subject of a TV investigation that alleges insider business deals between Douglas Feith, the Undersecretary of Defense and several companies many related to his "former" business associate Marc Zell, including: Zell, Goldberg and Company, Diligence, New Bridge Strategies, Barber, Griffith and Rogers, SAIC and The Iraqi International Law Group.

As of 25 September 2008 Diligence’s Advisory Board comprised of:

Questions have been raised regarding the ethics of "former police officers cashing in on their surveillance skills for a host of companies that target protesters".[8] See the Powerbase overview of the revolving door between the private security industry and the police.