From Powerbase
(Redirected from ACT! For America)
Jump to: navigation, search 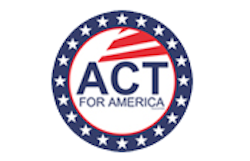 ACT! for America Logo, circa December 2015

ACT! for America, previously known as the American Congress for Truth (ACT) is a neoconservative organisation 'aiming to awaken and empower freedom-loving people everywhere to effectively combat'...'the multiple threats posed to America's national security and democratic values by radical Islam'. It was set up in 2002 by Brigitte Gabriel.[1]

On its website in 2007 ACT had described its 'seven-fold mission' as aiming to:'


• Keep citizens informed through action alerts, issues and legislation
• Educate millions of citizens about our enemy, and what they can and must do to protect themselves and their country
• Arm activists with information to get involved and take action
• Motivate citizens to become active in decisions affecting national security and the American way of life
• Network organizations with like-minded goals to bring change
• Empower citizens to have a voice in their government
• Fearlessly speak out in defense of America, Israel and Western civilization.[2]

By 2010 this mission was simplified to two overriding aims:

By fulfilling its mission, 'American Congress for Truth will arm concerned citizens, activists, opinion leaders, members of the media, and elected officials with the truth to effectively combat the spread of radical Islam and the threats it poses to peace, safety, security and liberty.'[3]

In 2004, the group, known as American Congress for Truth, had three unpaid officers including Gabriel and showed less than $5,000 in assets. But fundraising grew at a phenomenal clip between 2006 and 2007, and the organization soon outgrew its nonprofit status. ACT! for America was launched under a different provision in the tax code to allow Gabriel and her staff to more fully engage in public policy and politics. American Congress for Truth was renamed ACT Education and remains in operation. Gabriel herself drew a salary of almost $180,000 in 2009, and the organization maintained a travel budget of 25,000, according to public records.

ACT! claims an email list of 160,000 and a thousand local chapters around the country. These local chapters vary in their level of involvement and seriousness – but some have waged active and spirited local campaigns. One Florida chapter embarked on a loud drive to derail a professor’s appointment to a city human rights board, accusing him of being a radical Islamist.

Most recently, the group launched a television program on a local Florida cable station – and they are in negotiations to expand to other markets and channels. In their first two episodes, they netted two high profile members of Congress as guests: King and tea party star Rep. Allen West (R-Fla,).

The group has delved into state campaigns and federal lobbying – including getting involved in the Oklahoma effort to pass an anti-sharia law constitutional amendment. That amendment passed in November overwhelmingly but is currently the subject of ongoing legal wrangling.

ACT! put $60,000 into about 600,000 robocalls and a statewide radio campaign in support of the proposed constitutional amendment. The robocalls were recorded by former CIA director James Woolsey. And in a minute-long statewide radio spot, ACT! pointed to a New Jersey case where a judge used sharia law to deny a Muslim woman a restraining order as an example of the danger posed by creeping Islamism. [4]

However in 2014 the group saw their grant income fall by almost half of the previous year's donations.

Conservative funders in the USA

By 2010 the website no longer published ACT's board of advisors.