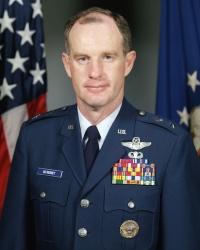 Lieutenant General Thomas McInerney, USAF (Ret.), is director of NetStar Systems, and a Fox News pundit. He advocates military-led regime change in Afghanistan, Iran, North Korea and Syria, and is a member of the Iran Policy Committee. NetStar Systems is a supplier of secure intranet and knowledge base systems to the Defense and Intelligence sectors. From March 1996 to December 1999, McInerney was Chief Executive Officer and President of Business Executives for National Security (BENS), a business association lobbying for greater commercial involvement in national defense programmes. From 1994, McInerney was Director of the Defense Performance Review (DPR), reporting to the Secretary of Defense. In that capacity, he led the Pentagon’s “reinventing government” effort, reducing government payrolls by contracting out work to private companies.

McInerney has filed a sworn affidavit casting doubt on Barack Obama's eligibility to serve as the president of the United States based on rightwing claims that he was not born in the country.[1][2]

While McInerney is not a neoconservative in the classical sense, he is associated with several neocons through his work:

Another IPC director is retired Gen. Thomas McInerney, who chairs the group’s advisory committee. An über hawk, McInerney has argued, among other things, that the U.S. ought to invade Syria in order to find the weapons of mass destruction that he alleges Saddam Hussein smuggled there before the 2003 U.S.-led invasion. McInerney, a Fox News analyst who also sits on the military committee of Frank Gaffney’s neocon Center for Security Policy, was recently exposed by Talking Points Memo as a supporter of the “birther” conspiracy that alleges, despite replete evidence to the contrary, that Barack Obama was not born in the U.S. and is therefore ineligible to be president.[3]