From Powerbase
(Redirected from Peterhouse, Cambridge)
Jump to: navigation, search 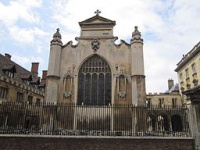 Peterhouse is a college at Cambridge University with a tradition of right-wing, reactionary thought. It became associated with the New Right in the 1980s and more recently has become a hub of neoconservative thinking, most notably by serving as a launch pad for the Henry Jackson Society. Peterhouse was also where Phillip Blond, the architect of 'Red Toryism', studied his theology PhD.[1]

Cowling came to the college in 1963 after a spot of journalism on The Times and Daily Express and an attempt to get into Parliament.

In 1971, he was joined by Dr Edward Norman, another clerical don and gadfly of the liberal ecclesiastical establishment, and soon after by David Watkin, a prolific conservative writer on architecture.

It was in the early 1970s - when Michael Portillo was an undergraduate - that Peterhouse briefly established a London base, at the Spectator. The magazine was edited for a time by George Gale; Maurice Cowling was his literary editor, and another Petrean, Patrick Cosgrave, was political columnist. Cosgrave had passed through the college on his way from Dublin to London.

He had a season of fame as the one journalist whole-heartedly to back Margaret Thatcher in her bid for the Tory leadership in 1975, and then a short season of favour at her court. Other kindred spirits at Peterhouse in the 1970s included Roger Scruton from the Hegelian Right and John Vincent. [2]

Tim Williams, a newspaper columnist who read history at Peterhouse, writes that: ‘The 1970s Peterhouse fogeys combined a desire to turn the clock back… with a revolutionary desire to replace traditional conservatism with a more muscular, aggressive version which would not accept the 1945 settlement but would destroy it, root and branch. These were to be the cultural shock troops of Thatcherism.’ [3] In his biography of Michael Portillo, Michael Gove wrote:

Peterhouse was the oldest, smallest and most reactionary of Cambridge's colleges. Portillo's tutor, Maurice Cowling, was spare, crusty and the university's most reactionary don. Cowling and his fellow Right-winger Shirley Robin Letwin, the author of The Anatomy Of Thatcherism [and the mother of Oliver Letwin], introduced their students to a type of Conservatism at odds with the progressive drift of Edward Heath's government.

Cowling's Conservatism was broadly a belief in letting those born to rule get on with it, rather than succumbing to modish liberalism. He argued that, in politics, 'elites... should eschew guilt and self-doubt to perform the duties of their stations' and that politics itself was 'primarily a matter of rhetoric and manoeuvre' among the small group of leaders whose 'accepted authority constituted political leadership'. [4]

Kenneth Minogue wrote of Cowling on the Social Affairs Unit blog that: ‘His main target was a kind of pious high mindedness that he detected lurking behind the dominant liberalism of political life and the deceptive pretence of impartiality in a lot of academic writing.’ [5] Cowling himself described the ‘Peterhouse Right’ as ‘a small group of dons whose teaching and writing is about the history of politics, art thought and religion’ and who ‘share common prejudices - against the higher liberalism and all sorts of liberal rhetoric, including ecclesiastical liberal rhetoric’. [6] According to Jonathan Parry, 'His resentment of the naïvety and power of the liberal intelligentsia was fuelled by its fervent opposition to the use of force, and its faith in the United Nations, particularly during the Suez crisis of 1956.' [7]

The Peterhouse Right were critical of the expansion of higher education in the '60s and 70s. In 1990 Cowling wrote:

The Peterhouse Right is mistrustful of higher education as it has developed in Britain in the last twenty-five years, believes that if higher education is to be extensive, it should educate practical capabilities, and wishes that the Robbins expansion could have been vocational and technological. [8]

In the 1960s Cowling campaigned against plans within the university to introduce a course in sociology, which he regarded as a vehicle for liberal dogma. [9] This reflected his highly cynical view of intellectual debate which he believed simply reflected the interests of participants. William Rees-Mogg, who visited Cowling at Peterhouse in the late 1970s, writes that, ‘His central doctrine was that political philosophies are mere rhetoric, designed to advance the politician or his party towards power. He was a brilliant exponent of political philosophies, but he did not believe that they were real.’ [10] Similarly Kenneth Minogue writes that Cowling ‘followed, to a fault, the cynical or Marxist line that utterances about the world are all "performatives" designed to play a persuasive role in argument… He was not averse to describing himself as a “Tory Marxist”.’ [11] According to Jonathan Parry, Cowling 'prescribed an extraordinary variety of books [to his students], including much Marxist and post-modernist criticism.' [12]

Apparently taking issue with this perspective, Roger Scruton, who was a Resident Fellow at Peterhouse from 1969-71, has complained that philosophy is not taken seriously by the right. In his memoirs he writes that: 'Ideas, in the Tory vision, are fleeting by-products of the social and political process, which are no sooner produced than forgotten. In this and other respects the Tory Party behaves as though Marx were its principal mentor: it treats philosophy as ‘ideology’, and economics as the motor of social life.' [13]

In the entry on Cowling in the Oxford Dictionary of National Biography Jonathan Parry writes that:

It was often stated that Cowling had a considerable influence on the direction of Conservative thought in the 1970s and 1980s, either personally or in association with academic and political co-conspirators in and beyond Peterhouse. The college was widely regarded as a conservative seminary, partly because several of Cowling's pupils went to work for the Conservative Research Department or Conservative newspapers. Cowling himself became a more active propagandist in the late 1970s, helping to found the Salisbury Group, which aimed to provide a forum for serious discussion of Conservative political philosophy, and editing the collection Conservative Essays (1978). [14]

Peter Oborne cites disgraced Labour spindoctor Damian McBride, who studied under Cowling at Peterhouse, as an example of the historian's political influence along with Michael Gove and the Labour press officer Michael Ellam. [15] According to his Times obituary, Cowling influenced Michael Portillo, Alistair Cooke, for many years a linchpin of the Conservative research department; Hywel Williams, an adviser to John Redwood; and David Ruffley, MP, an adviser to Kenneth Clarke. Others taught by him or influenced by his personality were Oliver Letwin, Charles Moore, Norman Stone, Niall Ferguson, Frank Johnson and Andrew Roberts. [16]

Peterhouse has more recently has become a hub of neoconservative thinking, most notably by serving as a launch pad for the Henry Jackson Society. The Henry Jackson Society's 'online launch' was announced in a March 2005 press release drafted by the ‘Organising Committee’ – the body which ran the Society before its registration as a UK charity. The Organising Committee consisted mainly of academics affiliated to Peterhouse. They were led by the Society’s co-founders Brendan Simms and Alan Mendoza. [17] Brendan Simms was then best known for his book Unfinest Hour: Britain and the Destruction of Bosnia, a highly critical account of British (non-interventionist) policy during the Bosnian War. Mendoza had written his PhD thesis on British policy during the conflict.

Simms had studied his history PhD at Peterhouse in the early '90s [18] and was appointed a fellow and director of studies at the college in 1993. [19] In May 1994 Simms, then 26, was the subject of a flattering article in The Times which reported that there was 'standing room only' for his lectures on decision making in the Third Reich. It referred to Simms as 'that rare combination: a teacher and a thinker.' The Times reported that Simms 'challenges the view that top Nazis actually believed much of the ideology'. 'His vision of decision making in the Third Reich,' according to the article 'traces many policies of the Holocaust to a grotesque parody of office politics. For Dr Simms it was the competition among favourites around Hitler that drove events.' [20]

Simms's belief that the politics of the Third Reich could only be understood through examining its internal politics, and that this drove its ideology, was rooted in the political philosophy of Maurice Cowling. Jonathan Parry writes that in his 1963 book The Nature and Limits of Political Science Cowling argued that, 'the political process was far too complex and fluid to be rationalized by theorists, being fully intelligible only to those within the system.' [21] Cowling had adopted a similar approach to Simms in his attempt to understand the reaction to Hitler in Britain. Peter Oborne writes that:

[Cowling's] particular scholarly contribution was to take Namier's pessimism about human nature, scepticism about political ideas, and dogmatic insistence that public events could only be explained by reference to narrow personal interest, to their ultimate conclusion. His most important book, The Impact of Hitler, argued in spellbinding detail that the British reaction to the rise of fascism in the 1930s could only be understood in terms of squalid calculations of partisan advantage.[22]