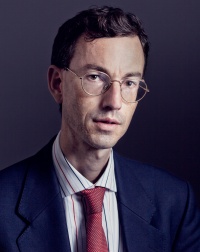 Brendan Peter Simms (born 3 September 1967) is the President and founder of the Henry Jackson Society.[1] He is also Newton Sheehy Teaching Fellow at the Centre of International Studies, University of Cambridge.[2] He is a fellow of Peterhouse College, Cambridge.[3]

Brendan Simms was born on 3 September 1967, the son of two academics David and Anngret Simms.[4]

Simms's father David Simms is a nephew of Dr Otto Simms, a former Church of Ireland Archbishop of Armagh, and Primate of all-Ireland.[5] Another uncle of David Simms, Brian Goold-Verschoyle, became a Communist spy despite his background in the Anglo-Irish gentry, and eventually died in prison in the Soviet Union in 1942.[6]

Brendan Simms' mother was born Anngret Erichson, into a publishing family in Rostock, Germany. Her father, Knut Erichson served as an army officer throughout World War Two, including time on the eastern front. As a result, he was warned to flee East Germany, losing the family publishing business in the process. He later became a joint editor of Frankfurter Hefte, a left-wing Catholic journal. While teaching in Scotland, Anngret Erichson met David Simms, then lecturing in Mathematics at Glasgow University. They married and settled in Dublin in 1965, where David Simms became a Professor at Trinity College. After a campaign to secure, Anngret Simms eventually became a distinguished head of geography and associate professor at University College Dublin.[7]

Brendan Simms was educated at the German School and Trinity College in Dublin before taking a doctorate at Peterhouse, Cambridge. [8] His PhD thesis 'Anglo-Prussian relations, 1804-1806: The Napoleonic Threat', was published in 1992. [9] The thesis is likely to have formed the basis of Simms's 1997 book The Impact of Napoleon: Prussian High Politics, Foreign Policy and the Crisis of the Executive, 1797-1806.

Simms was a resident fellow at Christ Church Oxford from 1992 to 1993 and was appointed a fellow and director of studies in history at Peterhouse in 1993. [10] In May 1994 Simms, then 26, was the subject of a flattering article in The Times which reported that there was 'standing room only' for his lectures on decision making in the Third Reich. It referred to Simms as 'that rare combination: a teacher and a thinker.' The Times reported that Simms 'challenges the view that top Nazis actually believed much of the ideology'. 'His vision of decision making in the Third Reich,' according to the article 'traces many policies of the Holocaust to a grotesque parody of office politics. For Dr Simms it was the competition among favourites around Hitler that drove events.' [11] Matthew D'Ancona hailed his "ingenious and disturbing new gloss on the history of the Third Reich", in an article on the Times survey of 22 'superdons'.[12]

Simms's belief that the politics of the Third Reich could only be understood through examining its internal politics, and that this drove its ideology, was rooted in the political philosophy of the late Maurice Cowling, the leading figure in the so called 'Peterhouse Right'. In the entry on Cowling in the Oxford Dictionary of National Biography Jonathan Parry writes that in his 1963 book The Nature and Limits of Political Science Cowling argued that, 'the political process was far too complex and fluid to be rationalized by theorists, being fully intelligible only to those within the system.' [13] Cowling had adopted a similar approach to Simms in his attempt to understand the reaction to Hitler in Britain. Peter Oborne writes:

[Cowling's] particular scholarly contribution was to take Namier's pessimism about human nature, scepticism about political ideas, and dogmatic insistence that public events could only be explained by reference to narrow personal interest, to their ultimate conclusion. His most important book, The Impact of Hitler, argued in spellbinding detail that the British reaction to the rise of fascism in the 1930s could only be understood in terms of squalid calculations of partisan advantage.[14]

Another right-wing figure who has influenced Simms is the Nazi apologist Carl Schmitt whom Simms credits with providing him a theoretical inspiration for his book The Impact of Napoleon. [15] In The Impact of Napoleon Simms writes that Schmitt ‘was well placed to observe the crucial role played by personal advisors, secretaries and others who monopolised Hitler’s immediate surroundings... [and was] sensitised to the importance of personal antipathy and ambition. [16]

The Times Higher Educational Supplement reported in 2001, that Simms "lectureship at the Centre for International Studies at Cambridge is funded by BAT; his seminar series on European Security, co-chaired by Paul Cornish, was funded by Lockheed Martin Corporation.[17]

Simms wrote a pamphlet for the Conservative organisation, the Bow Group, entitled 'Bosnia: why the Americans are right' which was published in November 1994.[18] He addressed the Croation Writers' Festival in Zagreb in December 1994.[19]

In 1998 he was appointed Newton Sheehy teaching fellow in international relations at the University of Cambridge Centre of International Studies, trustee of the Bosnian Institute in London and a member of the Executive Committee of the British Irish Association. [18]

In November 2001 Allen Lane published Simms's book Unfinest Hour: Britain and the Destruction of Bosnia, a highly critical account of British (non-interventionist) policy during the Bosnian War. Simms claimed that, 'Britain played a particularly disastrous role in the destruction of Bosnia, more so even than France. Her political leaders became afflicted by a particularly disabling form of conservative pessimism which disposed them not only to reject military intervention themselves but to prevent anybody else, particularly the Americans, from intervening either.' [20] Writing in The Observer, Nick Cohen called the book 'the best epitaph for the wretched years of the Major administration I've read to date' and complemented Simms's 'attention to telling detail and cool, literate anger'. [21] Douglas Hurd, who was heavily criticised in the book, wrote that 'From beginning to end Simms has written a polemic... The record, as he tells it, is one-sided from the beginning; offensive epithets are scattered over every page.' [22] The Financial Times called its 'an indignant account, verging at times on the intemperate'. [23] The Economist wrote:

Every page burns with scorn and indignation. We are told how Mr Hurd and Malcolm Rifkind, then Britain's defence secretary, first formulated a policy of non-intervention at any cost, and how they proceeded to foil every attempt by America and NATO to step in militarily. There follow personalised attacks on David Owen, who mediated in Bosnia, and on General Sir Michael Rose, who led the UN protection force there. Balkan observers in London as well as the British press and parliament are pilloried for flaws of logic, carelessness in formulation, failures of clairvoyance--an odd complaint for a historian--and, more seriously, a collective loss of moral spine. [24]

Despite some reservations over its tone, the book was generally well received by the press and certainly received a great deal of publicity. In 2002 it was nominated for the Samuel Johnson Prize [25] and was also listed amongst the Times 100 best books of the year. [26]

In December 2001, Simms linked his critique of British policy in Bosnia to support for the invasion of Afghanistan then underway:

British policy on Bosnia was clearly an intellectual failure, but it was also a failure of will, unthinkable in the Thatcher decade. As Richard Perle, an American conservative now much in the news and a strong supporter of the Sarajevo government, observed apropos of Bosnia: 'It was nothing like the Thatcher administration. The Major government was a very weak government.'[27]

Intervention in the Balkans disproves the notion that American foreign policy, or the variant espoused by neoconservatives, is somehow intrinsically anti-Muslim. If it were not for the United States, those who voted on Saturday would now be refugees or dead. Anybody who knows this will not be surprised that the most Muslim area in Europe, Kosovo, should also be the most pro-American and the most supportive of the War on Terror; there were certainly no “stop the war” protests in Kosovo.[28]

When the Palestinians exercised their democratic right to vote for Hamas most may have done so to protest against the endemic corruption of the Fatah regime. They may not even have been aware that they were thereby signing up to perpetual warfare, any more than Germans did when they cast their ballots for Adolf Hitler. But they should have known, as neither the Nazis nor Hamas made any attempt to hide their ultimate objectives.

The Israeli attack on Hamas is thus a legitimate attempt to secure Israel's southern flank in preparation for the showdown with Iran over its nuclear programme, which is expected this year.[29]