From Powerbase
(Redirected from Nathan Sharansky)
Jump to: navigation, search 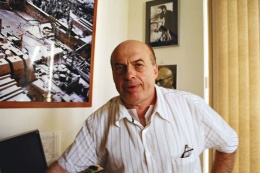 Natan Sharansky of the Jewish Agency for Israel photographed in 2007

Natan Sharansky (formerly Anatoly Sharansky) is a former Soviet dissident prisoner and former Deputy Prime Minister of Israel, now working for the Jewish Agency for Israel. His ideas have been praised and echoed by former President George W. Bush and his former Secretary of State Condoleezza Rice.[1]

Born Anatoly Sharansky in 1948 in Ukraine, then part of the Soviet Union, he was one of the founders of the Helsinki Monitoring Group. In 1973 he was denied an exit visa to Israel on security grounds and becmae heavily involved in the refusenik movement and "underground Zionist activities"[2]. In 1977 he was arrested on charges of spying for the United States. Although the U.S. government denied any connection between Sharansky and the C.I.A., Sharansky was convicted in 1978, sentenced to 13 years and imprisoned in a gulag (labour camp). His wife, Avital, campaigned for his release in conjunction with organizations around the world[3], and the support of President Ronald Reagan[4]. In February 1986 he was released in a US-Soviet prisoner exchange and immediately emigrated to Israel, adopting the Hebrew name Natan.

In 1988, he was elected President of the newly created Zionist Forum, active in promoting immigration and absorption of Soviet Jews, and was an associate editor of the Jerusalem Report. In 1994 he co-founded Peace Watch – an "independent non-partisan group committed to monitoring the compliance to agreements signed by Israel and the PLO"[5]. Then, in 1995 with Yoel Edelstein he co-founded a political party, Yisrael Ba'aliyah, allegedly with the aim of bringing a million Jewish immigrants from the former Soviet Union and a million Jewish citizens of the United States and Europe to Israel. [6]The name means both “Israel on the Rise” and “Israel for Immigration”. He represented the party in the Knesset from 1996 until 2003, [7] when it merged with the ruling right-wing Likud party.

Sharansky served as Minister of Industry and Trade from June 1996-1999 and as Minister of the Interior from July 1999 until his resignation in July 2000 in protest against Ehud Barak considering the possibility dividing Jerusalem.[8] He was Minister of Housing and Construction and Deputy Prime Minister from March 2001 until February 2003 and then Minister without Portfolio, responsible for Jerusalem, Social and Diaspora affairs from February 2003 until he resignation in May 2005[9] in protest aganist Sharon's plan to withdraw from Gaza.[10]

Sharansky is the author of three books. His memoir, Fear No Evil, was published in the United States in 1988 and describes his time as a prisoner in the Soviet Union. His latest book, Defending Identity: Its Indispensable Role in Protecting Democracy (2008), espouses the importance of national and religious identity in building democracy.

His most famous work The Case for Democracy: the Power of Freedom to Overcome Tyranny and Terror (2004) became widely known when President George W. Bush revealed that he had read and agreed with it. Bush stated that the book had become "part of my presidential DNA"[12]. Co-authored with Ron Dermer, the book argued that American foreign policy could and should uncompromisingly spread democracy in the rest of the world. Anatol Lieven, writing in the Financial Times has suggested that 'Mr Sharansky's book...is one of the few works on the Middle East that Mr Bush has read.'[13]

The Shirley & Banister Public Affairs Republican PR firm did promotion for Sharansky's Case for Democracy book, according to Jack O'Dwyer's Newsletter[14]. O'Dwyer's credited Shirley & Banister with securing a Rush Limbaugh interview and a meeting with President Bush, who along with Condoleezza Rice, has cited the work in speeches and interviews.

In February 2004, Sharansky announced his intention to visit Jonathan Pollard, the imprisoned Israeli spy, in a US federal prison. Though Pollard refused to see him, stating that the Israeli government was staging high-profile visits in place of applying intensive pressure to secure his release, [15] Sharansky lent his reputation as a former imprisoned Soviet dissident to the campaign by Zionist groups in the US to release Pollard.[16]

According to RightWeb, Sharansky is frequently invited to speak at neoconservative institutions in the United States, such as the American Enterprise Institute[17]. Martin Kramer of the Shalem Center has praised Sharansky, saying:

Like Francis Fukuyama and Samuel Huntington, Natan Sharansky has given us a vision. Like their vision, his too provokes thought. Unlike theirs, his has been endorsed by the most powerful people on earth. And unlike mere professors, he is also a man of action. He knows that ideas have consequences.[18]

Sharansky was awarded the Congressional Gold Medal in 1986 and the Presidential Medal of Freedom in 2006. The latter was presented by President George W. Bush. Lamenting the decision to award him this medal, the Palestinian Institute for the Study of Democracy, Muwatin, called it the celebration of a "racist".[19] Elsewhere, other Arab commentators have suggested that since his views and policies have undermined Palestinian rights 'Sharansky Symbolizes Anti-Arab Hatred'.[20]

Veteran Israeli journalist Uri Avnery wrote of Sharansky's much-discussed influence on Bush: 'The idea that the teachings of this particular political philosopher are the guiding star of the mightiest leader in the world, the commander of the biggest military machine in history, is rather frightening'.[21]

In June 2004, Haaretz reports, Sharansky held a committee meeting attending by just one other Israeli minister and decided to use the Absentee Property Law of 1950 to expropriate thousands of dunams (1 dunam = 1,000 square metres) of land in East Jerusalem[22] By declaring the land to be abandoned - even though the Palestinian owners lived in the West Bank and were not in fact absent - the land could therefore be confiscated by the state without paying compensation to the owners. Israel's attorney general annulled the government decision in February 2005, stating that it was against Israel's obligations 'according to the rules of customary international law'.[23]

While Sharansky was at the Adelson Institute for Strategic Studies - named after its main funder, billionaire and hardline Zionist Sheldon Adelson - he helped to organise the June 2007 Democracy and Security International Conference in Prague along with Vaclav Havel and former conservative prime minister of Spain Jose Maria Aznar.

The event gathered individuals seen as dissidents from Middle Eastern countries, China, and Eastern Europe and U.S. President George W. Bush was the headliner speaker, addressing attendees on the subject of the war on terror. He reportedly attended against the advice of the State Department because of the personal intervention of Sharansky[24].The conference was dubbed the 'Neoconservative International' by one commentator.[25]

Sharansky has spoken several times at the Herzliya Conference, an annual policy conference held in Herzliya, Israel, hosted by the Interdisciplinary Center Herzliya:

Without Jerusalem 'we are foreign invaders and colonialists'

As co-founder and chairman of One Jerusalem, a hard-right pressure group, and in many public statements, Sharansky has signalled his unwillingness to share Jerusalem with the Palestinians. While Minister for Jerusalem and Diaspora Affairs, he wrote, in a Haaretz article entitled Temple Mount Is More Important Than Peace that:

The values symbolized by Jerusalem are not only religious in nature. One doesn't have to be religious to understand that without our historical connection to Jerusalem, without the link to the past, without the feeling of continuity with the ancient kingdoms of Israel for whom the Temple Mount was the center of existence, we really are foreign invaders and colonialists in this country.

Sharansky wrote in The Wall Street Journal of what he termed 'the Palestinians' most shameful military tactic: pimping the suffering of their civilians as a weapon of war.' He went on to state his belief that 'Palestinian children are dying today not because of Israeli brutality, but because their own leaders have chosen to use their children as human shields, and their pain as a battering ram against Western sensibilities.'[27]

No partner for peace

Sharansky has consistently argued that Israel wants peace but the Palestinians do not and therefore Israel should not compromise for peace. For example, he wrote in mid-2011:

There are attempts to say that now is the time for Israel to urgently make peace, but there’s no leadership on the Palestinian side for it. Will we sign agreements with dictators whose days are numbered? The simple answer, “let’s make peace and that’s it,” doesn’t cut it.[28]

Elsewhere he has argued that greater democratization is needed on the Palestinian side before there will be any real prospect for peace, stating that Israel has in the past tried and failed 'to turn a Palestinian dictatorship into a partner'.[29]

Against Gaza pull-out, for re-occupation

Sharansky resigned from Ariel Sharon's government in 2005 in protest at the withdrawal from Gaza. Later, during a visit to Australia in 2008, Sharansky said during an interview that invading Gaza again would be advisable if rocket fire from that territory did not cease. He said on Australian radio that if Hamas militants kept firing fockets 'we will have no choice but to reoccupy at least those dozen territories from which missiles are falling on our houses everyday.'[30]

The 'moral clarity' of Ronald Reagan

Sharansky has said that the collapse of the Soviet Union can be attributed in large part to three men: Andrei Sakharov, Henry 'Scoop' Jackson, and Ronald Reagan. He has praised Reagan's well-known speech in which he dubbed the Soviet Union an 'Evil Empire' and for what Sharansky calls Reagan's 'moral clarity to understand the truth, and the courage both to speak the truth and to do what needed to be done to support it.'[32]