From Powerbase
(Redirected from Lord Robertson of Port Ellen)
Jump to: navigation, search 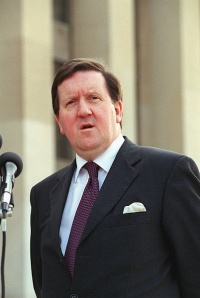 Lord George Robertson responds to a reporter's question during a joint media availability following his Pentagon meeting with Secretary of Defense Donald H. Rumsfeld on June 20, 2001.

George Robertson (Lord Robertson of Port Ellen), born in 1946, was the Secretary-General of the North Atlantic Treaty Organisation (NATO) between October 1999 and early January 2004. He served as UK Defence Secretary for the United Kingdom from 1997 to 1999, before taking up his NATO position and becoming a life peer as Baron Robertson of Port Ellen, of Islay in Argyll and Bute.

Robertson has been described as “a pragmatic right-winger in traditional Labour terms, he was prominent in the battle to oust the left-wing extremists who infiltrated Labour in the early eighties, describing the leaders of Militant as a "cancer" which had to be cut off.” [1]

While other members of his party supported a unilateral disarmament of nuclear weapons, Robertson opposed; he has been in the past accused of being too pro-American, although he is also pro-European. He was a fervent supporter of NATO when Labour wanted to leave the alliance. [2]

As a member of parliament for the Labour Party, Robertson was Minister of Defence between 1997 and 1999 before being nominated by Tony Blair to become NATO secretary General. He stayed in this position until his resignation in 2004 [3].

Robertson, who retired from the United Nations and his reportedly tax free yearly salary of £140,000, now earns an additional combination of salaries in excess of £350,000, working on behalf of businesses using his experience with domestic and foreign governments to aid his employers. Although he has denied that he is a lobbyist, Robertson in 2005 used his connections in the Department Of Trade to arrange a meeting for one of his employers, Cable and Wireless, with his former colleague Ian Pearson. Previously he had also arranged a meeting between the chief of the Export Agency, within the Department of Trade, so as to receive help for the company's international business plans. It was reported in 2005 that Roberston's salary from Cable and Wireless was £421,601 and a £200,000 bonus for working 2 days a week.[4]

Research conducted by Labour found that Robertson was not alone. More than 30 former members of government who had left since May 1997 had become company directors and consultants, including former British American Project fellows Baroness Symons (British Airways, P&O and a U.S law firm) and Peter Mandelson (French industrial consultancy).[5]

Robertson, as well as having other directorships and advisory/lobbying roles in international companies (including the military industry companies, the Weir Group and the Smith Group), is also a senior counsel to the Cohen Group, which offers strategic advice and consultancy on global business and is chaired by former United States Secretary of Defense to Bill Clinton, William Cohen [6][7]

Robertson was appointed a non-executive director of Weir Group in February 2004 and retains the position over a decade later. The Weir Group has substantial interest in fracking services in the US, and stands to profit significantly from any future fracking boom in the UK.

Robertson was Secretary General of NATO (1999-2003) and before that Secretary of State for Defence (1997-99). Lord Robertson is deputy chairman of Cable and Wireless plc. He is a strategic advisor to the Royal Bank of Canada, Europe, on the Advisory Board of Englefield Capital, senior counsellor with the Cohen Group (USA) and President of Chatham House.

One of the Britons chosen for the delicate task of selecting participants for the Successor Generation project was George Robertson MP, the former Shadow Secretary of State for Scotland who, to the surprise of some, was made Defence Secretary in the new Blair government. Why there should have been any shock in this move is in itself surprising because Robertson has been a pillar of the Anglo-American/NATO establishment from the time he left the service of the General and Municipal Workers' Union (as it then was called) in 1978 to become Labour MP for Hamilton.

A former secretary of the right-wing Labour Manifesto group (most of whose members defected to the Social Democratic Party in 1981), Robertson joined the government-funded British Atlantic Committee in the same year that it was publicly attacking the Labour party's non-nuclear defence policy. He was on the Council of the Royal Institute for International Affairs (Chatham House) from 1984 to 1991 and on the steering committee of the annual Konigswinter conference for much of that time. He has been a governor of the Ditchley Foundation since 1989 and was vice-chairman of the Westminster Foundation for Democracy from 1992 to 1994. A man more likely to be given the defence brief and less likely to include the possession of nuclear weapons in the Blair government's newly announced defence review can scarcely be imagined.[8]

Robertson's entry in the House of Lord's Register of Interests for 2006/07 lists him as[9]:

'Nemo me impune lacessit' is the motto of The Order of the Thistle. The Order, pertaining to Scotland, is the second-most senior in precedence. Britain may not have a written constitution has an order of precedence. Its equivalent in England, The Most Noble Order of the Garter, is the oldest documented order of chivalry in the United Kingdom, dating to the middle fourteenth century. Robertson was appointed to Her Majesty’s Privy Council in 1997, and then appointed by her Royal Highness as a Knight of the Thistle (KT) and then awarded the GCMG (Knight Grand Cross of the Order of St Michael and St George) in 2004. Other awards: