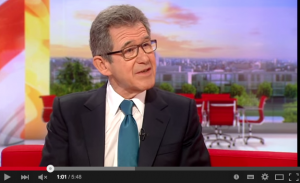 John Browne, Lord Browne of Madingley, is a crossbench member of the British House of Lords on a leave of absence since March 2018. He was group chief executive of BP from 1995 to 2007 and[1] and was a senior business adviser to the UK Coalition government from from 2010-2015.

Browne was chairman of fracking company Cuadrilla Resources until March 2015 and the managing director and partner of Riverstone Holdings, the venture capital firm that backs it. He also co-ran Riverstone's private equity renewable energy fund, reportedly the largest of its kind in the world. He relinquished both roles upon taking up a new position as executive chairman of the new Russian-backed energy investment outfit, L1 Energy in March 2015. The same year he also joined the board of Huawei Technology, a leading provider of 5G technology.

In June 2010 Browne was appointed as the new Coalition government's 'Lead Non-Executive Director' at the Cabinet Office, charged with recruiting business leaders to reformed departmental boards.

He stepped down from this position on 31 January 2015.

As chairman of the controversial fracking firm Cuadrilla Resources until 2015, Browne led the charge for fracking in the UK for many years.

However, in June 2019 Browne admitted in an interview with the Observer that "fracking in the UK doesn’t make much sense. I think it was a test to see if it worked. We probably don’t need to do it." [3]

In November 2013 at a lecture at the London School of Economics Browne had admitted that shale gas exploration would not lower gas bills in the UK. This contradicted the high-profile claims made just months beforehand by UK Prime Minister David Cameron and Chancellor George Osborne that it could help curb soaring energy bills.

Browne told his audience that 'we should make more use' of solar technology. He appeared less supportive of the UK government's controversial decision to back French firm EDF Energy's new nuclear power plant at Hinkley Point. Nuclear power, said Browne, was 'very, very expensive indeed' and the siting of new reactors on the coast when sea level and storm surges are rising was a 'big issue' and so they must be made resilient.

Browne was also critical of the government's continued bias for fossil fuels describing the fact that more state subsidies are given to oil and gas than to renewable energy as 'like running both the heating and the air conditioning at the same time'. [4]

In 2014 Browne was on the international advisory board chairman of Mubadala Oil and Gas, a company owned by the government of Abu Dhabi, which at the time had signed an agreement with Somalia's government to help it find oil. When asked about this, Lord Browne declined to comment and Mubadala is not declared in his register of interests.[5]

Lord Browne of Madingley was born in 1948. He joined BP in 1966 as a university apprentice. He holds degrees from Cambridge University and Stanford University, California. He is a Fellow of the Royal Society, the American Academy of Arts and Sciences and the Royal Academy of Engineering. He has numerous honorary degrees, fellowships and awards.

He is presently a Partner of Riverstone Holdings LLC, a company which invests in renewable and conventional energy. He is Chairman of the Board of Trustees of Tate, Chairman of the Trustees of the Queen Elizabeth II Prize for Engineering and Chairman of the International Advisory Board of the Blavatnik School of Government at Oxford University. He is a member of a variety of other advisory boards.[2]