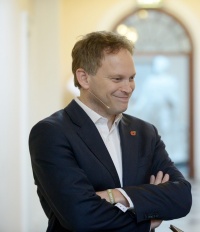 Grant Shapps was appointed Conservative Party Chair and Minister without Portfolio in September 2012.[1] Despite the Conservative's success in the 2015 general election, Shapps was removed from his role as chair of the party, and instead was appointed minister of state at the Department for International Development, losing his seat in the Cabinet. [2]

He is also the temporarily Parliamentary Under-Secretary to the Foreign and Commonwealth Office as of May 2015, carrying out the ministerial portfolio for James Duddridge, [3]

He had previously been appointed a Minister of State at the Department for Communities and Local Government in May 2010.[4]

Before becoming an MP in 2005, Shapps worked under the pseudonym Michael Green. Despite claims to the contrary from the Labour Party, Shapps denied that he continued to use the name whilst in Parliament - with Jeremy Hunt and Dr Liam Fox backing him on twitter. However, on the 16 March 2015, the Conservative Party confirmed Shapps had acted as Green whilst an MP.[5] [6]

In April 2015 Wikipedia announced they had blocked a user account on 'suspicions that it is being used by the Conservative Party chairman, Grant Shapps "or someone acting on his behalf" to edit his own page along with the entries of Tory rivals and political opponents'. A third of the contributions by the username 'Contribsx' were on Shapps' page; in particular removing embarrassing references of his business activities as Michael Green. The rest of the changes are largely unflattering changes to senior political figures including; Philip Hammond, the foreign secretary; Justine Greening, the international development secretary; George Osborne, the chancellor; and Lynton Crosby, the Conservative's 2015 election campaign strategist.

A spokesperson for Wikipedia said: '...based on the evidence the account is either run by Shapps directly or being run by someone else – an assistant or a PR agency – but under his clear direction.'

Shapps has denied the accusation saying they are '...untrue from start to finish, and [are] quite likely dreamt up by the Labour press office. Sadly it is typical of the smears coming from those who would rather not debate policy and substance.'[7]