From Powerbase
(Redirected from EMET)
Jump to: navigation, search 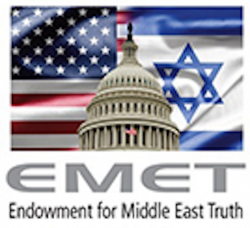 Endowment for Middle East Truth (EMET) is a right-wing neoconservative/Zionist organisation seeking to 'educate' the political class in the United States about the dangers of radical Islam.[1] EMET was reportedly involved in the distribution of the film Obsession, distributed by the millions before the US election. In the organisation's own words, "EMET has made it their business to distribute the movie, Obsession: Radical Islam’s War against the West, to every single congressional office."[2]

Ali Gharib and Eli Clifton report in an article for The Electronic Intifada:

Like hard-line neo-conservatives, EMET opposes any land concessions to Palestinians and takes other hard-line positions identified with Israel's right-wing Likud Party and the "Settler Lobby" there. EMET's website says, "We regard ourselves as 'intellectual revolutionaries.'" The group's acronym, EMET, mirrors the name of a predecessor to the Foundation for the Defense of Democracies, which was called Emet. The word means "truth" in Hebrew.

Two weeks ago, EMET sponsored a seminar series on Capitol Hill named for the controversial multi-billionaire casino and hotel magnate Sheldon Adelson, a major donor to right-wing Zionist organizations in the US; the far-right lobby group, Freedom's Watch; and the Republican Jewish Coalition (RJC), whose efforts to persuade Jewish voters that Democratic presidential candidate Barack Obama is aligned with radical anti-Israel forces in the Islamic world have drawn strong criticism from the mainstream Jewish press here.

EMET's board of advisers includes a list of familiar neo-conservative figures, as well as three former Israeli diplomats, including a former deputy chief of mission in Israel's Washington embassy. The group is headed by Sarah Stern, who began her activism on Israeli issues in opposition to the 1993 Oslo Accords between Israel and Palestinians. She made a career out of her activism in the far-right Zionist Organization of America (ZOA) as its national policy coordinator from 1998 through 2004.

Notable members of the advisory board include prominent hard-line neo-conservatives, including former American Ambassador to the UN the late Jeane Kirkpatrick; Daniel Pipes of the Middle East Forum; and the Hudson Institute's Meyrav Wurmser, the Israeli-born spouse of Vice President Dick Cheney's former top Middle East adviser, David Wurmser. Other prominent neo-conservative members of the board include Center for Security Policy (CSP) president Frank Gaffney; former CIA chief James Woolsey; and Heritage Foundation fellows Ariel Cohen and Nina Shea, who has also served for years on the quasi-governmental US Commission for International Religious Freedom.

The US-born and -educated hard-line deputy managing editor of the Jerusalem Post and senior fellow for Middle Eastern Affairs at Gaffney's CSP, Caroline Glick, is also an adviser. Glick, Pipes, and Walid Shoebat, a "reformed" terrorist and EMET adviser, are all featured as experts in Obsession. Also among the top names of listed advisers to EMET are three Israeli diplomats. Two of them, Ambassadors Yossi Ben Aharon and Yoram Ettinger, were among the three Israeli ambassadors whom then-Israeli Prime Minister Yitzhak Rabin referred to as "the Three Musketeers" when they lobbied Washington in opposition to the Oslo accords. Indeed, Stern began her career at the behest of three unnamed Israeli diplomats who were based in Washington under Rabin's predecessor, Yitzhak Shamir, according to EMET's website. Ettinger was at one time the chairman of special projects and is still listed as a contributing expert at the Ariel Centre for Policy Research, a hard-line Likudist Israeli think tank that opposes the peace process. Ben Aharon was the director general -- effectively the chief of staff -- of Shamir's office.

The third Israeli ambassador, Lenny Ben-David, was appointed by Likud prime minister Benjamin Netanyahu to serve as the deputy chief of mission -- second in command -- at the Israeli embassy in Washington from 1997 until 2000. Ben-David had also held senior positions at the American Israel Public Affairs Committee for 25 years and is now a consultant and lobbyist.[3]

Obsession, screengrab from 'Obsession: Radical Islam's War against the West

In the 23 October 2008 edition of the London Review of Books, EMET's founder Sarah Stern denies that EMET has been part of the Obsession Project, i.e., funding the film[4]. EMET's website states that Stern has been showing this film to members of Congress. [5] Furthermore, Adam Shatz reports:

If there is any confusion about Emet’s relationship to ‘Obsession’, it has been sown by Sarah Stern and her colleagues. I based my assertion that Emet had arranged the distribution of the film on an interview which Ari Morgenstern, then identified as a spokesman for Emet, gave to Ali Gharib and Eli Clifton of the Inter Press Service news agency on 24 September, in which he said with undisguised pride that Emet organised and oversaw the distribution of ‘Obsession’. The ‘Obsession Project’, a partnership between Emet and the Clarion Fund, he told them, ‘costs a great deal – it’s a multimillion dollar effort.’ Now Sarah Stern says that ‘no exchange of money ever took place’ between Emet and the ‘Obsession Project’, and Morgenstern has not been heard from since. Two days after Morgenstern spoke to IPS, Stern told JTA, the online Global News Service of the Jewish People, that she’d never spoken to him. But on 29 September, after JTA obtained records of emails and phone conversations in which Stern compliments Morgenstern on his press release for ‘Obsession’ (‘soldier on!’ she encouraged him in an email sent on 23 September), she admitted that she’d spoken to Morgenstern and had been involved in the ‘Obsession Project’, though she insists that Emet hasn’t bankrolled its distribution. What, then, is the nature of the relationship? Any chance that Emet’s desire to distance itself from the film’s distribution has something to do with the complaint against the Clarion Fund which the Council on American-Islamic Relations lodged with the Federal Election Commission?[6]