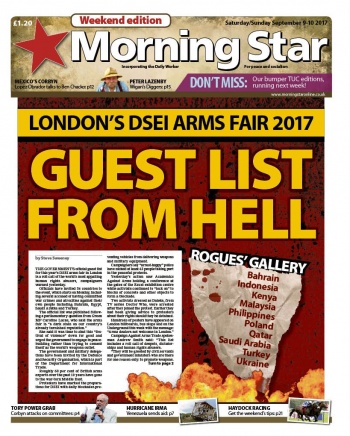 Defence Systems and Equipment International (DSEI) is one of the world's biggest arms trade fairs, held in London every two years. It is heavily backed by the British government and run by Clarion Events. 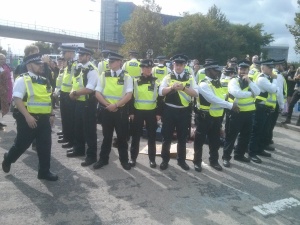 In 2018 a freedom of information request by Al Jazeera News revealed that the UK had spent US$1.3 million (UK £977,000) on policing and security at the 2017 DSEI arms fair. More than 100 protestors were arrested during the week-long anti-DSEI demonstrations outside the Excel Centre in East London. [1]

As published on the Clarion Events/ Clarion Defence website in 2017:

'This international event is projected to attract over 35,000 visitors and looks set to boast an unrivalled conference programme with headline speakers from the Defence & Security industry. DSEI 2015 saw 2,874 VIPs including 255 programmed delegations attend, comprising members of UK Parliament, and Heads of State from multiple nations.

'Over 1,600 exhibitors including industry-leading manufacturers are expected to exhibit from five core sectors: Air, Land, Naval, Security & Joint. On top of this, over 40 international pavilions are expected to be involved, showcasing the very latest technology on offer from companies around the world.

The list of exhibitors was released in September 2017 following a parliamentary question by Caroline Lucas MP. It revealed that 56 countries had been invited; these included a range of regimes with appalling human rights records: such as Algeria, Bahrain, Egypt, Kuwait, Oman, Pakistan, Philippines, Qatar, Saudi Arabia, Turkey, the United Arab Emirates and Vietnam. Those government and military delegations were invited by the Defence & Security Organisation, which is part of the Department for International Trade. Other governments, such as Israel, sent delegations to promote arms via national pavilions, and others were invited by the event organisers, Clarion Events. [2]

“DSEI is a landmark event presenting to the world the excellence of the UK defence and security businesses. We expect to welcome high-level international delegations to take part in meetings with our strategic partners. For us in government it is hugely important, an important showcase, a stage for diplomacy, a platform for the international engagement. We are really looking forward to DSEI in September 2017.”

“DSEI is a fantastic showcase for defence companies where international buyers, sellers, developers, thinkers, educators and the trainers can all get together. The UK defence industry is looking to recruit more engineers, scientists and developers into 200,000 jobs and up to 10,000 apprentices within UK defence companies. DSEI is an excellent tool to highlight the challenges the industry face as well as showcase its capabilities domestically and overseas.”

At the DSEI fair in 2005, a UK political communications consultancy Strategic Communication Laboratories relaunched itself as a psyops operator. Chaired by former Tory defence minister Sir Geoffrey Pattie 'with working capital of more than £11m [and] 20 full time staff, able to 'deploy 100-strong teams' the Guardian reported that SCL 'believes armies are prepared to buy such services from a private provider and maintains that psyops can shorten conflicts. Chief executive Nigel Oakes points to the surrender of nearly 90,000 troops in the first Gulf conflict, attributed to psyops. He said: "We used to be in the business of mindbending for political purposes, but now we are in the business of saving lives."' [3]