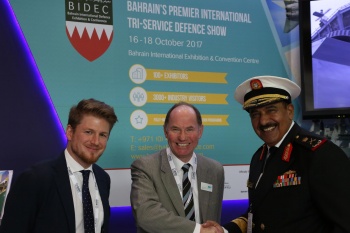 Simon Williams (centre), chairman of Clarion Defence and Security at the inaugural Bahrain defence show in 2017

Rear Admiral Simon Williams OBE is chairman of Clarion Defence and Security, the private firm behind one of the world's largest arms trade fairs held in London every two years, the Defence Systems and Equipment International. He was appointed in 2012.

Clarion is a leading event organiser for the arms trade globally.