DLA Piper is a global law firm with lawyers in 40 countries.

Alongside PR and dedicated lobbying agencies, law firms also provide lobbying advice to their clients. The practice is commonplace in the US. While there are fewer players in the UK, those law firms that do give such advice, have influence. DLA Piper is one with a significant lobbying practice in Britain. Its areas of practice include the following:

In addition to its legal services, DLA Piper says it can help make sure that a client's priorities 'are included in the Brexit process' and any EU/UK trade agreement through 'strategic advocacy' and other services.

Brexit services that it offers clients include: providing intelligence on the process; representing client interests in the EU and UK; and 'creating strategies to minimise risks and capitalise on opportunities.'[2]

DLA says it 'will ensure that [a client's] sector, industry, and corporate priorities are recognised and included in the Brexit process and the resulting EU/UK trade agreement.' 'Our extensive knowledge of the EU and the UK institutions', it says 'gives us access to relevant stakeholders... in Brussels, London, and the capitals of EU Member States'.[3]

DLA Piper's Brexit Committee, which coordinates the firm's approach to the withdrawal of the UK from the EU, includes:[4]

How business can influence Brexit 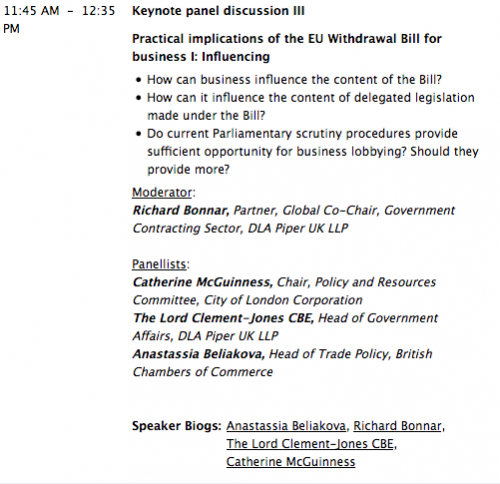 In November 2017 DLA Piper sponsored and presented at a conference in London on 'The EU Withdrawal Bill: Practical Implications for UK Business' in association with the City of London Corporation.[6] The conference was chaired by DLA Piper's Brexit Director Paul Hardy.

The Director General of Department for Exiting the European Union, Sarah Healey, gave a keynote speech at the conference.

The day included a panel discussion on 'practical implications of the EU Withdrawal Bill for business: Influencing'. The panel features DLA Piper's Lord Tim Clement-Jones, described in the programme as the firm's 'head of government affairs', aka lobbying, although Clement-Jones describes himself on his register of interests as simply a 'Managing Partner' of the London office.[7]

The panel was set to discuss the following issues:

How, or why, or who might be wanting to influence the EU (Withdrawal) Bill, a crucial piece of legislation which transfers all EU laws into British laws, isn't known, though. Tickets to the conference were priced at £595.00 (plus VAT).

Lobbying for PPP and PFI

A 2010 brochure for its 'Property and Planning Communications' practice says:

'Communicating effectively with decision-makers and the communities they represent has never been more important for those operating in the property and development sectors. From proposing a supermarket extension, to a new town, to a major infrastructure project, landowners and developers have to balance the planning and legal arguments with the need to secure political support. This is in addition to the national and local requirements to engage and consult with a wide range of stakeholders.

Working closely with clients' in-house and consultant teams, GGR has an industry-leading track record in delivering planning permissions for major regeneration and infrastructure schemes, retail, residential and mixed use projects. This means maximising public and political buy-in, whilst minimising and managing potential opposition.'[9]

DLA Piper also offers lobbying services to clients in Scotland. According to a former employee, DLA Piper provides 'strategic communications and government affairs advice to the firm’s clients with interests in Scottish public policy', particularly in the areas of 'infrastructure planning, housing, supermarket retail, health and aspects of energy.'[10]

DLA Piper Scotland has helped clients in the following sectors:

Some of its biggest US lobbying clients in 2017 were: Booz Allen Hamilton | Apple | Coca-Cola | Raytheon and Association of Banks in Lebanon

Refusal to join the Association of Professional Political Consultants

Following a committee inquiry chaired by Labour MP Tony Wright, it emerged that DLA Piper was one of three agencies refusing to join the APPC. Tim Clement-Jones, Liberal Democrat spokesman on culture and sport in the House of Lords, is founder and chairman of the lobbying arm of the firm, Global Government Relations (GGR). This creates - in the eyes of the APPC - a conflict of interests, as members cannot employ sitting peers or MPs. GGR's then head of media Eben Black, instead of Clement-Jones, was due to appear before the committee.[13]

On 10 October 2007, the US House of Representatives Committee on Foreign Affairs passed Resolution 106, which accuses the Turkish rulers in 1915 of genocide. There was an intensive on behalf of the Turkish government to sway the committee, described by Ali H. Aslan as follows:

Both the Turkish and the US governments strongly opposed the resolution and were joined by DLA Piper, the Livingstone Group, public relations company Fleishman-Hillard and other companies that officially conducted lobbying activities on behalf of Turkey as well as by big corporations that have sizable commercial deals with Turkey such as Boeing and BP.[14]

Lobbying for the UAE

The firm receives a fee of $50,000 a month for services including '[contacting] Members of Congress, congressional staff and Executive Branch officials in connection with strengthening the ability of the United States and Saudi Arabia to advance mutual national security interests.'[15]

On 24 November 2010, DLA held a breakfast meeting with the then Commercial Secretary to the Treasury, Lord Sassoon.[25]

DLA Piper is a legal services organisation whose members and affiliates are separate and distinct legal entities.[27] Together, the organization boasts more than 3,200 lawyers in over 24 countries and 63 cities throughout the world.

It was known until 4 September 2006 as DLA Piper Rudnick Gray Cary.

It was the third largest law firm in the world by number of attorneys after Clifford Chance and Baker & McKenzie. (Financial figures for 2005 ranked the firm second to Clifford Chance in worldwide turnover with over $1.5 billion in revenue).[28]