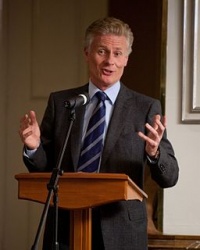 Paul Clive Deighton, Baron Deighton, KBE (born 18 January 1956) is a British politician who has served as Commercial Secretary to HM Treasury since January 2013.

Deighton previously served as chief executive of the London Organising Committee of the Olympic and Paralympic Games (LOCOG), which was responsible for planning the 2012 Summer Olympics and Paralympics.

He is a former investment banker, and was a former chief operating officer of Goldman Sachs Group. [1]

Lord Deighton stepped down as commercial secretary to the Treasury after the 2015 general election, and sought advice from the Advisory Committee on Business Appointments (ACOBA), a non-executive directorship at The Holdingham Group. The committee permitted him to take on the role so long as he did not employ any privileged information from his time as minister in the role, and observes a two year lobbying ban from his last day in office. The appointment was announced in December 2015. [2]

In February 2016 Deighton sought ACOBA's advice on taking up a new role as executive chairman of Heathrow Airport Holdings Ltd. Deighton was again advised he could do so as long he did not use any privileged information from his time in government and observes a two year lobbying ban from his last day in office. He did so in March 2016.[3]

In April 2016, Deighton sought the advice of ACOBA concerning an appointment as a non-executive director of Square Inc., a US-based technology business specialising in financial services. Given that he had no prior dealings with the sector or any access to privileged information, the committee permitted the appointment on the conditions that he did not draw on any privileged information from his time in office and that he serve a two year lobbying ban from his last day in office. He took up the appointment in May 2016. [4]

Working alongside Stephen Lovegrove, the Permanent Secretary at the Department for Energy and Climate Change, Deighton has been leading the ongoing negotiations with French nuclear firm EDF to reach a "strike price" agreement for a new nuclear power station at Hinkley Point, Somerset. [5]

Going to the Grand Prix and dining with lobbyists

In November 2013 Deighton attended the Abu Dhabi Grand Prix as a guest of Mubadala, an investment and development company 'supporting the diversification of the United Arab Emirates by investing in key social infrastructure and creating globally integrated industry sectors in Abu Dhabi'.

On 4 December 2013, Deighton had dinner with lobbyist-law firm DLA Piper. No details of what was discussed are available. [6]